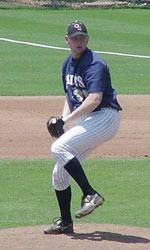 CLEMSON, SC – Fourth-seeded Georgia Southern rode the pitching of starter Brett Lewis to a 6-2 victory over third-seeded Elon in the Clemson Regional on Saturday at Doug Kingsmore Stadium. The Eagles (39-24) will now play the loser of the Clemson-East Carolina matchup tonight at 7:00 PM, while Elon (34-22) has been eliminated.

Elon got back-to-back RBI-doubles from Whit Bryant and Jim Swenson in the bottom of the first to take a 2-0 lead, but Georgia Southern countered with two runs of its own in the top of the second. Rocky Baker singled to left to score A.J. Zickgraf and Carlos Love scored later in the inning on a fielder’s choice to knot the game at two.

The Eagles took the lead in the third when Love singled in Matt Herring with two outs for a 3-2 advantage and added another run in the fifth when Jemel Spearman scored on a fielder’s choice. Georgia Southern added another run in the seventh off an RBI-single by pinch hitter Matt Hammond. Love’s sacrifice fly in the ninth capped the scoring for the Eagles.

Whit Bryant (7-3) got the loss for Elon. Jason Cadenhead closed the game for Georgia Southern by 1.2 scoreless innings to earn his ninth save of the season. Love led the Eagles by going 2-2 with two RBIs while Hammond also went 2-2 with one RBI.