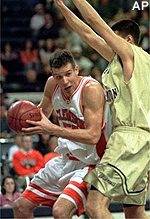 Game Notes From The Men’s Basketball Game Against Maryland

Clemson Player of the Game Junior center Adam Allenspach finished the Maryland game with 20 points and 10 rebounds…the native of Parkland, Fla. was 6-of-9 from the field and 8-of-10 from the free throw line…the game was Allenspach’s sixth double-double of the season and his second in a row…the 20 points are a career high versus ACC opponents.

ACC’s Top Two Scorers Clemson’s Will Solomon (21.3 ppg) and Maryland’s Juan Dixon (18.7 ppg) entered the game one and two in the ACC in scoring…both players were held below their season averages on Tuesday night…Solomon finished the game with 12 points and Dixon with 11.

Clemson Had Only Five Turnovers Clemson had only five turnovers in the game versus Maryland…that total ties for the second fewest turnovers in a game in school history…an amazing stat, since Maryland opponents have averaged over 19 turnovers a game this season, the highest figure in the ACC.