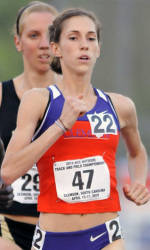 GREENSBORO, NC – A total of four student-athletes from Clemson punched tickets Thursday to the NCAA Outdoor Championships at the East Preliminary Round, held at North Carolina A&T’s Irwin Belk Track. Xavier Tromp earned spots in next month’s NCAA field at Eugene, OR from the Tiger men’s team, while Kim Ruck and April Sinkler earned their way in individual events from the women’s squad.

Ruck continued her breakout track season for the Tiger distance group. The Greer, SC native and indoor All-American finished in fifth place in the women’s 10K late Thursday night. She posted a time of 34:55.79 and was consistently in the lead pack for the duration of the race. Ruck will next compete in two weeks at Hayward Field at the University of Oregon.

Sinkler was solid in the long jump, but never hit a “great” mark. She hit her best leap on her second attempt of the prelims, jumping 20’6.25″ which was good enough for a seventh-place finish. She is the first female to earn a spot at outdoor nationals in the long jump since Gisele Oliveira in 2003. She later competed in the high jump, where she was the East leader coming into the event. However, she cleared only her first bar (5’8.25″) and did not finish among the top 12 to advance.

Tromp breezed through the pole vault competition to earn the trip to Eugene, his first-ever NCAA national bid. The French exchange student cleared 17’4.25″ on his second attempt, and it was all he would need in order to earn a spot among the top 12 in the East. Tromp entered Thursday’s meet tied for first in the East with an 18-foot clearance earlier in the season at the ACC Championships.

Berg became the first male athlete in Clemson history to advance to the NCAA Championships in the hammer throw. He was the 12th and final thrower from the East site to earn his way into the field at Eugene. His top mark on Thursday was a throw of 202’3″. It will be Berg’s first-ever competition at an NCAA Championships meet as well.

Stormy Kendrick won her first round heat and Kristine Scott also advanced to the quarterfinal round (Friday, 6:15 PM) in the women’s 100m dash Thursday. Kendrick had a time of 11.40, while Scott clocked in at 11.48. Warren Fraser (10.51) was the top finisher in the event from the men’s squad.

Sonni Austin advanced to the quarterfinal round in the 400 hurdles. She posted a personal best time of 58.42, fourth-best in Clemson history, and finished second in her heat on Thursday. Austin has the 15th-best time heading into tomorrow’s quarterfinals, which are scheduled for 7:15 PM.

Brittany Pringley, another freshman sprinter, advanced to the quarterfinals (Friday, 5:45 PM) in the 400m dash. She had a time of 54.03 and was third in her heat. She raced shortly after a surprise visit by her parents, who came up to the meet all the way from her hometown of Miami, FL.