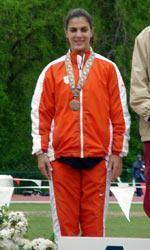 Former Clemson women’s track & field athlete Joana Costa competed in Friday’s qualification round for the pole vault at the 2008 IAAF World Indoor Championships. The meet is being held in Valencia, Spain. She cleared 13’7.25″ and finished 13th in the qualifying stage, an improvement of three spots and 10 centimeters (13’3.5″) from the 2007 IAAF Championships in Osaka, Japan.

Costa competed for the Lady Tiger track & field program from 2000-03, where she was coached by current assistant Glenn McAtee as a senior. Costa ranks third on the Clemson all-time performance list in both the indoor and outdoor pole vault. She won three All-ACC honors in the event and was the league’s indoor champion in 2000. Costa was the first-ever NCAA participant in the pole vault from Clemson after earning a berth in the national meet under McAtee’s tutelage in 2003.