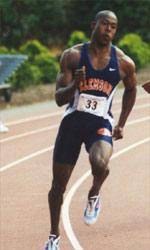 INDIANAPOLIS, IN – Shawn Crawford, a former men’s track and field standout at Clemson University, has been named USA Track & Field’s Athlete of the Week after posting world-leading times in the 100 meters and 200 meters Friday at the Engen Grand Prix meet in Pretoria, South Africa. Crawford won both events by running 10.07 seconds in 100m, and 20.08 in the 200m. The 2002 U.S. Outdoor 200m champion bettered his previous world-leading time of 10.10 in the men’s 100m, which he ran on March 28 in Roodepoort, South Africa.

Now in its third year, USATF’s Athlete of the Week program is designed to recognize outstanding performers at all levels of the sport. USATF names a new honoree each week and features the athlete on the USATF Web site. Selections are based on top performances and results from the previous week.