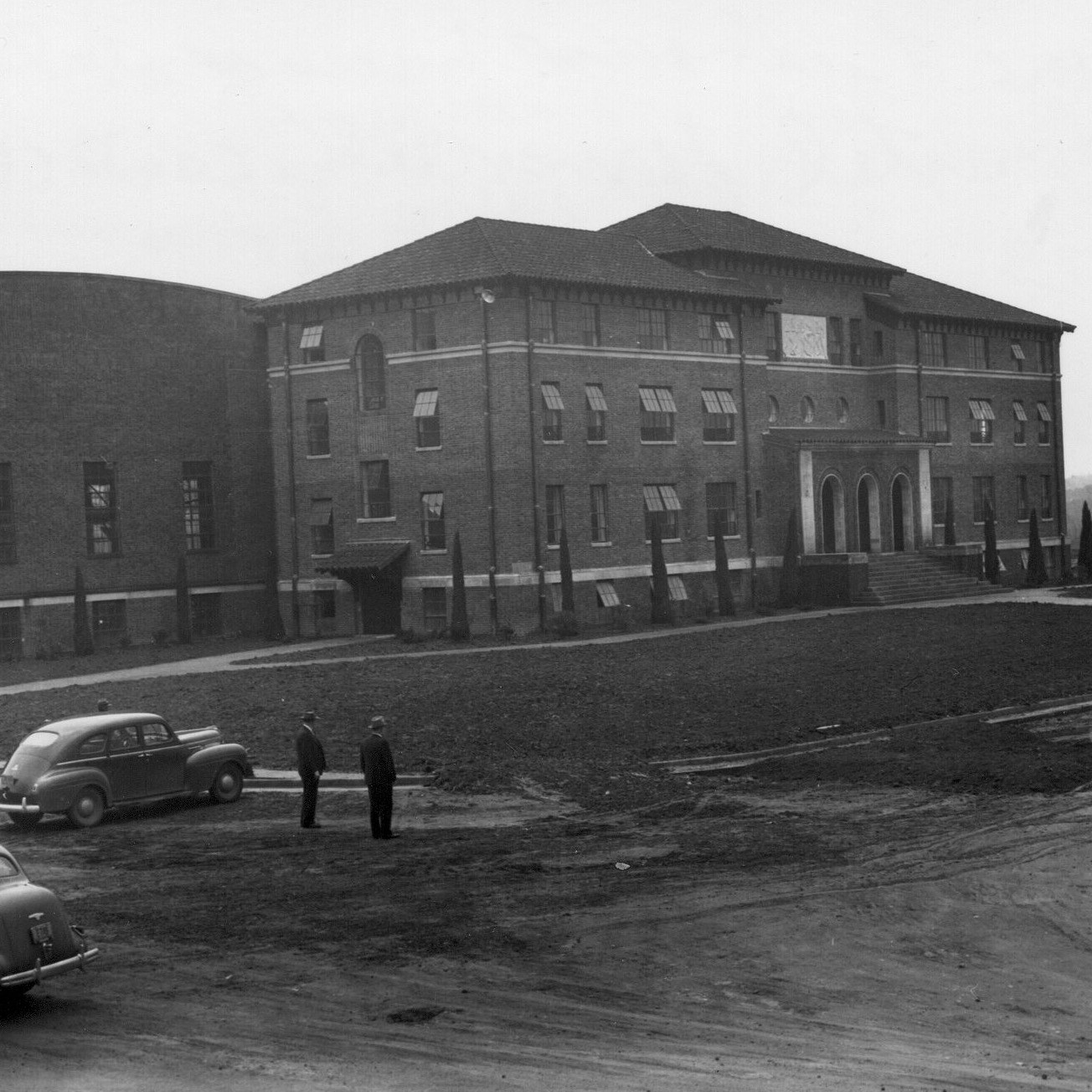 It was a different time and a simpler era when Fike Field House was the home of the Clemson Men’s Basketball Team and the entire athletic department.

It was a distinct advantage for the home team and a place that was dreaded by the visitors.  Former Wake Forest Head Basketball Coach Bones McKinney once said that Fike Field House that is located on the Clemson campus had a “character and a uniqueness all of its own”, then he would quickly quip “and so did Alcatraz!”

It was a place where 4,000 people would cram into the building and if you didn’t have Clemson across the uniform you were fair game for the fans to taut and yell at for two hours. McKinney said that you could get a large lead on Clemson and you would think that should quiet this crowd.  “But no!  Clemson would get two straight baskets and the crowd would get right back into it and get louder and louder.

Many strange stories have formed from the days of Fike Field House (1929-1968) that bare repeating.

In the January 8, 1962 Clemson-Florida State basketball game, the two head coaches did not sit with their respective teams, they sat at mid court together (Bud Kennedy of FSU left, Press Maravich of Clemson, right in photo below) discussing the game.

They were best of friends.  The night before the game long time Clemson Sports Information Director Bob Bradley and his wife Louise had Clemson’s Head Coach Press Mavarich and the Seminole Head Coach Bud Kennedy over at their house for dinner.

It wasn’t uncommon for the Bradleys to have the home and visiting basketball coaches over for dinner at their house the night before and the evening after the basketball game for meals. Sometimes the referees would be guests of the Bradleys and enjoyed their hospitality.

On this particular night, Mavarich and Kennedy decided they would sit together at center court at the basketball game the following night.

When a time out was called, each coach would go to his bench, hand out some coaching talk, and then back to center court they would go.  They sat together side-by-side the entire game. The coaches were asked what they talked about during the game and one of them said, “your man walked, but they didn’t call it,” or “he’s over my guy’s back, I didn’t think they were going to call it.”   “That was a bad call,” or “you got by with one then,” and so forth.

Clemson won the game, 75-69 with Jim Brennan leading the way with 26 points.

Fike Field House was known not only as a loud place but a very loud place! The place was packed and the noise would reverberate throughout the building.   Bill Currie was the voice of the North Carolina Tar Heels before Woody Durham and he would always come prepared.

Currie was well aware of the noise at Fike Field House, so when he would broadcast a game at Clemson, he would bring a large drink cup with him.   He would jam a hole in the bottom of the cup and stick his microphone up through it, and he would talk in the cup.   The reason he would do this is so the radio audience could hear him better over the crowd noise.

Fike was also known as a dark arena that was in need of more light fixtures.  The walls were dark, the floor was dark, but it made for an intimate setting for the home team.

Joe Belmont a player at Duke (1953-56) came into Fike Field House at Clemson during warm-ups wearing a miner’s helmet with the lamp lit.

One opposing coach even said “that they should have played the game outside in the parking lot if it wasn’t so cold.   There would be more light under the street lamps than in Fike.”

Vic Bubas, a former head coach at Duke, brought his Blue Devils into Fike during the 1967-68 season, the last year in Fike. Bubas said that when the game was over, he was going to come out and kiss the Tiger that was painted on the floor at midcourt goodbye.

True to his word, after he talked to his team and the media after the game, Bubas got down on his all fours and kissed the Tiger.

Television Camera in the Locker Room

One of the earliest telecast games in the ACC came out of Clemson in January of 1958 against The Citadel.  Press Maravich was the Tigers’ coach.

Just like today, television producers were looking for innovative things, a lot of them being trial and error.  One of the things they wanted to do at this particular game was to come into the Clemson dressing room live at halftime and Maravich agreed.  The Tigers led 28-21 at the half.  Bob Blackledge, center for the Cadets, was not a factor in the first 20 minutes and Press Maravich told his team while the television camera was on was for his team not to worry about Blackledge.  “He’s playing outside and he doesn’t like to go to the basket.” He only had two points at the half and had two fouls.

Coach Maravich always thought that the Bulldogs must had a television or a monitor in their locker room and heard his halftime talk, because Blackledge came out and lit up the scoreboard.  He scored 13 of his 15 points in the second half by driving to the basket and The Citadel won the game, 60-57.  Needless to say, live television cameras never got close to the Clemson dressing room again as long as Maravich was around.

The Clemson Board of Trustees renamed Clemson Field House to Fike Field House on November 25, 1966 in honor of Rube Fike, who was instrumental in starting IPTAY. Fike was a cancer doctor in Atlanta and was a physician to the famous and prize-winning author Margaret Mitchell. He once did not cash a check she had written to him and she was angered. He instead wanted to keep it as a souvenir of her signature.  Fike was a 1908 graduate of Clemson and was from Spartanburg, SC.

Other Events at Fike Field House

Many dances and other social events were held at Fike Field House. It was the home of the Clemson Boxing team when it was a varsity sport.    Clemson spent 39 basketball seasons at Fike and finished with 200 victories in the building.  The boxing team had an incredible record of 33-4-4 in the building for a .854 winning percentage during its years of existence (1928-1948).

Many celebrities and entertainers in their day made appearances at Fike Field House. Probably the most well-known international celebrity to appear at Fike was Evangelist Billy Graham who spoke to the Clemson Cadets on March 21, 1950.

Fike Field House was well-known in its day, and served the university well as Clemson’s home basketball and boxing arena and center for Clemson’s social events.  Today it’s still a big part of Clemson as it’s the home and the hub of the Clemson Intramural Department.

(Another photo of Clemson’s Head Coach Press Maravich (L) and Florida State’s Head Coach Bud Kennedy sitting at midcourt together. Note the Tiger painted in the middle of the floor.)