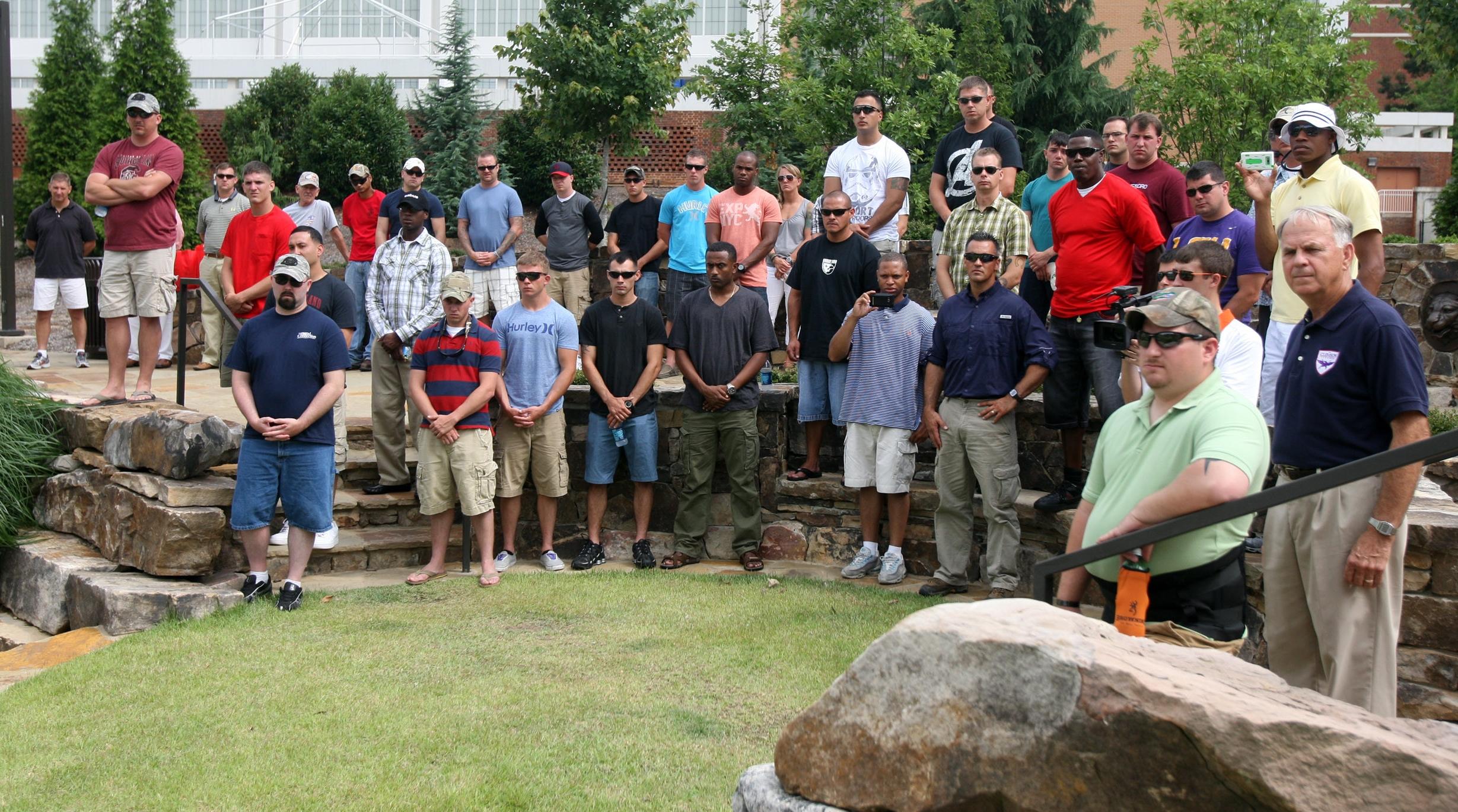 CLEMSON, SC – Clemson University, originally known as Clemson College, was founded as a military school in 1889.

Now, 124 years later, it is a coeducational civilian institution, but military remains a focal point for the university – as manifested by its latest gesture of appreciation Thursday afternoon.

Clemson partnered with Keowee Key in hosting and providing a tour of several facilities on campus for members of The Wounded Warriors Project, a nonprofit organization that aims to raise awareness for injured men and women that serve in the United States Armed Forces.

“(The event) is very important, especially given the history and tradition that Clemson has as it relates to military heritage,” Clemson Director of Athletics Dan Radakovich said. “It’s important to see so many people who are just general staff members who are here that have come over and spent some time and said hello to people.”

The tour began at 10:30 a.m. in Memorial Park, where the Marines gathered at the Reflection Point and gazed toward the Scroll of Honor, a monument honoring the 482 identified alumni killed during the span of World War I to the wars in Afghanistan and Iraq.

Colonel Sandy Edge administered an overview of the Scroll before lending motivation to the troops by having four soldiers stand near and read the four boulders, each containing a word of the question, “How will you serve?”

The Wounded Warriors then absorbed the history of Howard’s Rock and had an opportunity to rub it prior to making their way down The Hill and into the weight room.

Assistant strength and conditioning coach Larry Greenlee, in his 16th year at the position, pointed out nuances of the weight room and weight training, mentioning summer workouts often begin as early as 5:30 a.m.

“For them to come here and just give us a minute of their time, it’s almost like a way to give back and let them know that we appreciate them,” Greenlee said. “Every year I look forward to being here and talking with them.”

The tour group was treated to the surprise appearances of Clemson defensive back Dante Stewart, defensive tackle Josh Watson and offensive tackle Eric Mac Lain, each of whom introduced themselves and thanked the warriors for their services.

“When you have people from the military who take their time to come here to us, that’s an honor,” Mac Lain said. “Guys are fighting for our freedom, and what they’ve done for our country is just unimaginable.”

The second-to-last stop of the day for the assemblage was the West Zone Team Room, where Assistant Athletic Director Brad Scott integrated a series of comedic one-liners in a speech to help relieve the tension and weight many military personnel carry on a daily basis.

After watching Jeff Scott‘s chill-inducing video “The Hill,” the enlistees were given a plentiful lunch and a short talk by Radakovich, who expressed having already learned the rooted importance of the military heritage at Clemson despite being named the new director of athletics only eight months ago.

Radakovich mentioned his gratification with “how embracing, warm and open the Clemson family is.”

“This is probably one of the greatest experiences,” said Cannon, “especially getting to see all these people and what they’re doing and seeing how the people support all the military. This is really something to think about. It takes you back. Overwhelming, honestly.”