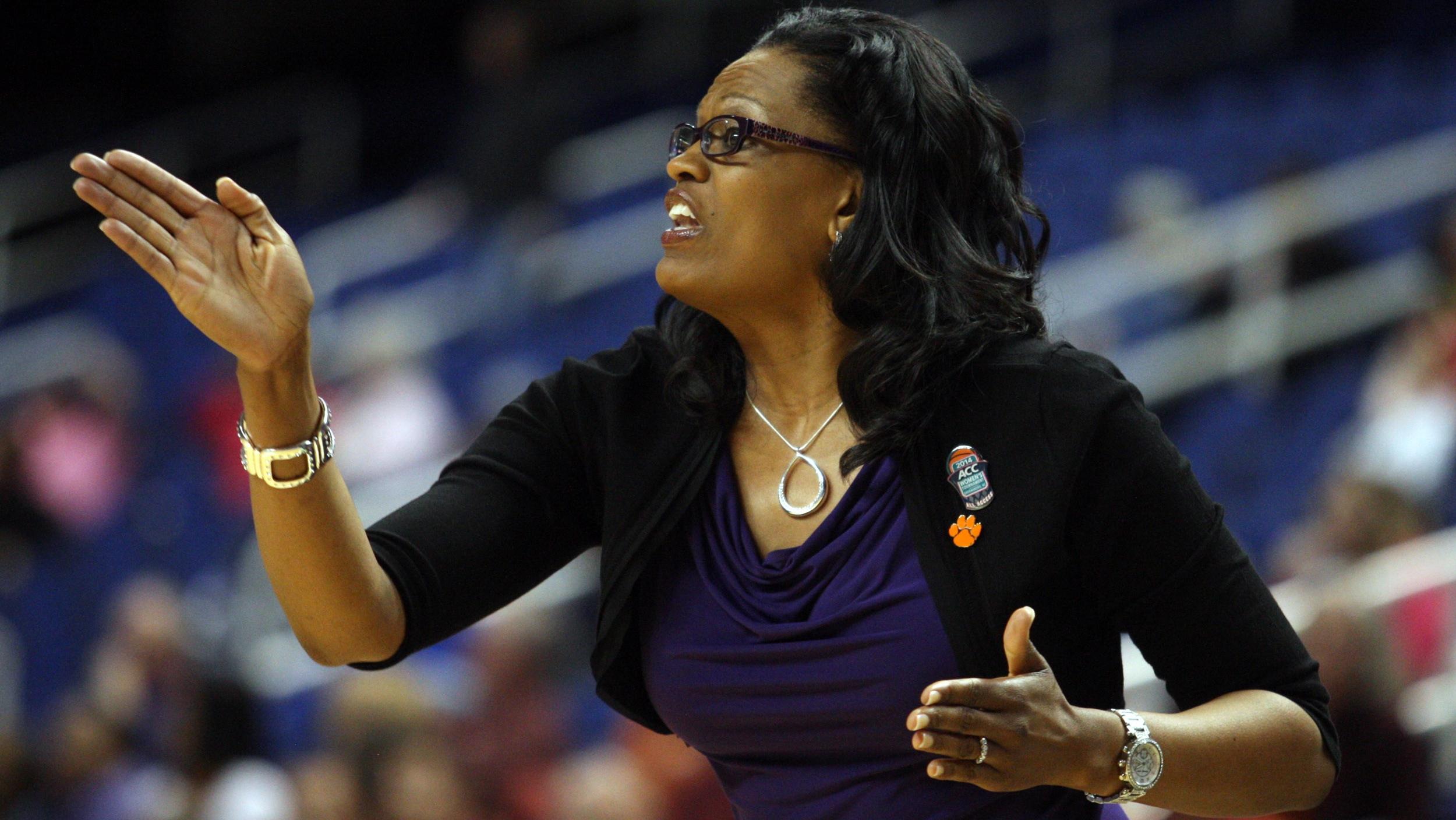 GREENSBORO, NC – At the end of a long season, Audra Smith sounded nothing like someone who was ready for a nice break from basketball.

Clemson’s coach had barely settled into her seat at the postgame press conference after her team’s season-ending loss to Syracuse in the ACC Tournament before she was thinking of ways to build on the progress the Lady Tigers made in her first season at the helm.

“My wheels are already turning about postseason workouts and into the summer and next fall,” Smith said, “because before we know it the season is back around again.”

Fewer than 24 hours after beating Virginia Tech for its first ACC Tournament win in five years, 13th-seeded Clemson was back on the court to face fifth-seeded Syracuse on Thursday morning.

The Lady Tigers gave the Orange all it wanted in a hotly-contested first half that saw 10 lead changes, as neither team led by more than five points.

But only playing with seven players against a Syracuse squad going 11 players deep, Clemson faded down the stretch and fell 63-53 to end its first season under Smith at 13-19.

The Lady Tigers played two games in the tournament before eight teams had even played one, and junior wing Nikki Dixon admitted they wore down toward the end of the second game.

“We were limited on numbers,” Dixon said, “but we’ve been limited on numbers all season, so it’s not an excuse. We have been playing with six or seven or eight strong, regardless of what it is. I just felt like we kind of ran out of gas.”

Dixon drained a three from the wing to pull Clemson within three, 44-41, with 11:00 left. The fiery veteran turned to her bench, pumped both fists and let out a roar after the shot splashed through the net. But the Orange went on a 12-2 run over the next four-plus minutes to pull away for the win.

Dixon and Nyilah Jamison-Myers each scored in double-figures for a second straight game with 15 points apiece to lead the offense.

For Jamison-Myers, a 6-foot-3 post from Orangeburg, SC, the tourney represented a coming-out party of sorts, as she followed her career-high scoring effort of 19 points against Virginia Tech with another strong outing against Syracuse.

“I’m just working on consistency,” she said. “I’m just trying to make it to where I can bring it like this every night for next season and seasons afterwards.”

In their first season under Smith, the Lady Tigers finished with 13 wins for the first time since 2009-10. And while 13 wins clearly don’t represent the standard they’re hoping to attain, the progress that the program made was difficult to miss for those paying attention.

“As a team, we really are changing,” Dixon said. “Coach Smith has come in and set a really good foundation for this program. And we’re ready to take off.”

Laying that foundation was certainly not without its bumps in the road, as the team began the season with 12 players on the roster, but only had eight – one of whom, junior Jordan Gaillard, didn’t play with a broken nose – at its disposal Thursday.

Smith hasn’t been shy about laying down the law in terms of discipline, whether that means players not starting, players not playing or players not even dressing out for games.

“They won’t admit it in public,” she said, “but for these young ladies, this has been a tremendous adjustment for them. Literally, it’s like I picked them up and dropped them off in Japan, and they’re like, ‘Oh, my God, I don’t know the language. How do I get around? How do I navigate this thing?’

“I completely changed everything that they’ve been used to. So I made them very uncomfortable, which is part of the process in terms of growing.”

Clemson will bid farewell to seniors Quinyotta Pettaway and Chancie Dunn, both of whom were key contributors to the season.

Coming in, the Lady Tigers will welcome a six-player signing class into the program next season, led by a pair of four-star recruits in the post, Ivy Atkism of Monroe, GA, and Makayla Johnson of Columbia, SC, as well as 6-foot-4 Justice Wright of Warner Robins, GA, the daughter of Clemson men’s basketball legend Sharone Wright.

Smith pointed to her team’s play in the ACC Tournament as tangible evidence of the progress it made this season.

After losing to Virginia Tech by 26 points six days earlier, the Lady Tigers turned the tables and won by 13 in the first round of the conference tourney on Wednesday, then followed that up by pushing one of the league’s top five teams to the brink.

“The future for us is very, very bright,” Smith said. “As long as they continue to learn to understand me – which sometimes can be quite difﬁcult. I guess I’m a strong disciplinarian is a nice way to put it. But we have to have it. We have to do it.

“And this is a tremendous league. I’m so excited to be back in this league, but already I’m ready to get started working so we can be ready to get back here, and so our stay here next year will be longer than it was this year.”