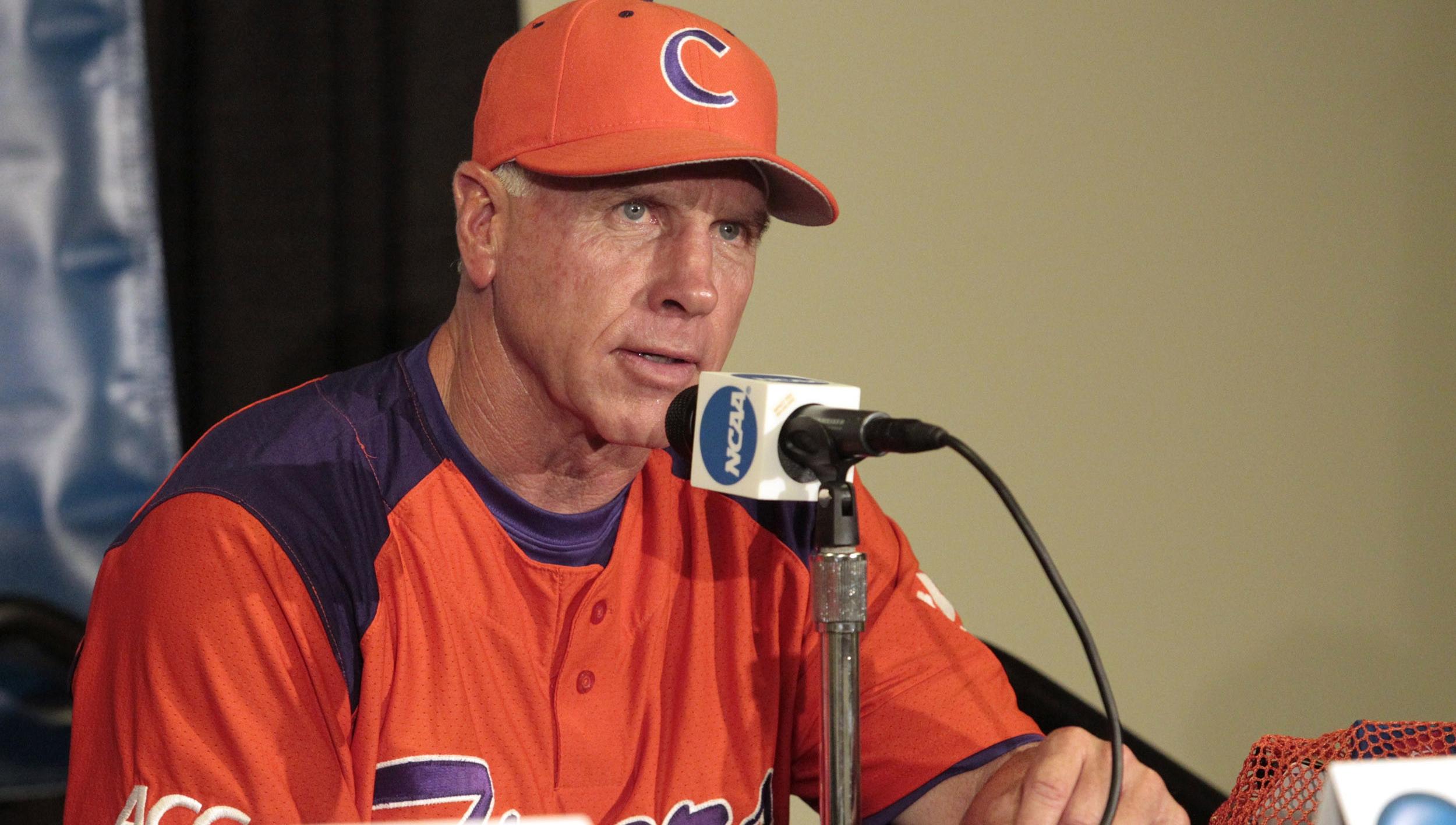 COLUMBIA, SC – This won’t be a good week for Jack Leggett, and there’s a good chance next week won’t be either.

But unlike some years past, Leggett can already see the light at the end of the tunnel, even as the condition he calls “PSD,” or postseason depression, is only just setting in.

The Clemson head coach compares the end of each baseball season, which came for the Tigers this year with their 3-1 loss to Liberty in the Columbia (SC) Regional on Sunday, to “a runaway train” that comes to a sudden halt.

With less than half of the players on his roster having played in a Clemson uniform prior to 2013 – 18 of the 35 were newcomers to the program – Leggett is able to take solace in the bright future that lies ahead, however.

“The first game we played (in the regional) we had seven guys on the field that were brand new, having never been in a regional,” Leggett said. “Six of them were freshmen that started for us. So, I’ve got to feel good about that. Once I get past today, I’m going to choose to look at this as a really positive year and a positive future. And those really positive Clemson people that we have, I hope are feeling really good about what we’ve got ahead of us.”

Leggett was speaking at a postgame news conference after the Flames beat Clemson for the second time in three days to bring an end to the Tigers’ season, and he had to look no further than the two players seated beside him for reminders of why he felt so optimistic.

The two Tigers invited to speak were catcher Garrett Boulware, who emerged as the team’s top power hitter, and outfielder Steven Duggar, who was perhaps the team’s best hitter down the stretch and in the postseason, getting a base hit in his final at-bat of the season to finish with an even .300 batting average.

The former is a sophomore, the latter a freshman.

“These two guys embody what we have for the future,” Leggett said. “We have one of our catchers go down, and (Boulware) caught virtually every single game during the course of the year, almost every inning, and that is a tough thing for somebody to do. He’s done a great job for us, and he battles; he grinds it out. And he’s going to get some rest, a little earlier than we wanted him to. He’s going to be a really good player for us. Steven Duggar has got a great future as a freshman, along with a lot of our other freshmen.”

One of the keys to the Tigers’ 40-win season was the performance of their freshman pitchers. Two of those freshmen, Zack Erwin and Matthew Crownover, started two of the three games in the regional, while staff ace Daniel Gossett, only a sophomore, got the ball in the other.

As a group, the team’s five freshmen hurlers had combined for a 16-8 record going into the regional with a 3.49 ERA over 216.2 innings pitched. The 16 victories are the fourth-best total for a freshman class in Clemson history.

“I’m proud of how we battled,” Leggett said. “We worked hard all year long. We’ve been in a lot of games likes this. We’ve garnered 40 wins against the fifth-toughest schedule this year. We’ve got 16 wins out of our freshman pitchers, which gives us something to look forward to. Almost half our games were against NCAA tournament teams. We’ve beaten five of the teams that are hosting regionals. We’ve played a tough schedule, and it’s been a grind.”

Eventually that grind wore the young Tigers down, however. After going into the final series of the regular season at Florida State with a chance to win the Atlantic Division of the ACC, they dropped two of three games there to finish third in their division and then lost all three games they played in the ACC tournament.

After losing to Liberty twice, on either side of a 10-2 win over Saint Louis, Clemson’s season came to a bitter end Sunday, as it scored just once despite getting its leadoff man on base in six of the nine innings and went 1-for-14 with runners in scoring position in the game.

“We’re going to get back to Clemson, and we’re going to regroup,” Duggar said. “We’re going to do everything in the fall, and they’ll be some new guys in next year that can help us out some. But we’ll just continue to get better and work on what we need to work on, and maybe this time next year we’ll be celebrating.”

In the end, the Tigers advanced to a regional for the 19th time in 20 seasons under Leggett, and did so this year with arguably the youngest roster during his tenure.

But while he can take some comfort in the bright future ahead, Leggett admits that won’t make the next couple weeks any easier.

“If you have any competitive juices at all in your body, you always remember these things,” Leggett said. “I’ve got a lot of competitive kids on our team and a lot of guys that have got a lot of pride in what they do every single day, and a lot of coaches around me, and myself, that have a lot of pride in what we do. We work extremely hard at what we do; we care about what we do; we’re passionate about what we do. So, you never forget about these feelings. You never forget how it feels to lose a ball game or how the season ends. That’s always a motivating factor because nobody wants to feel like this – especially when it’s your life, when it’s what you do.”