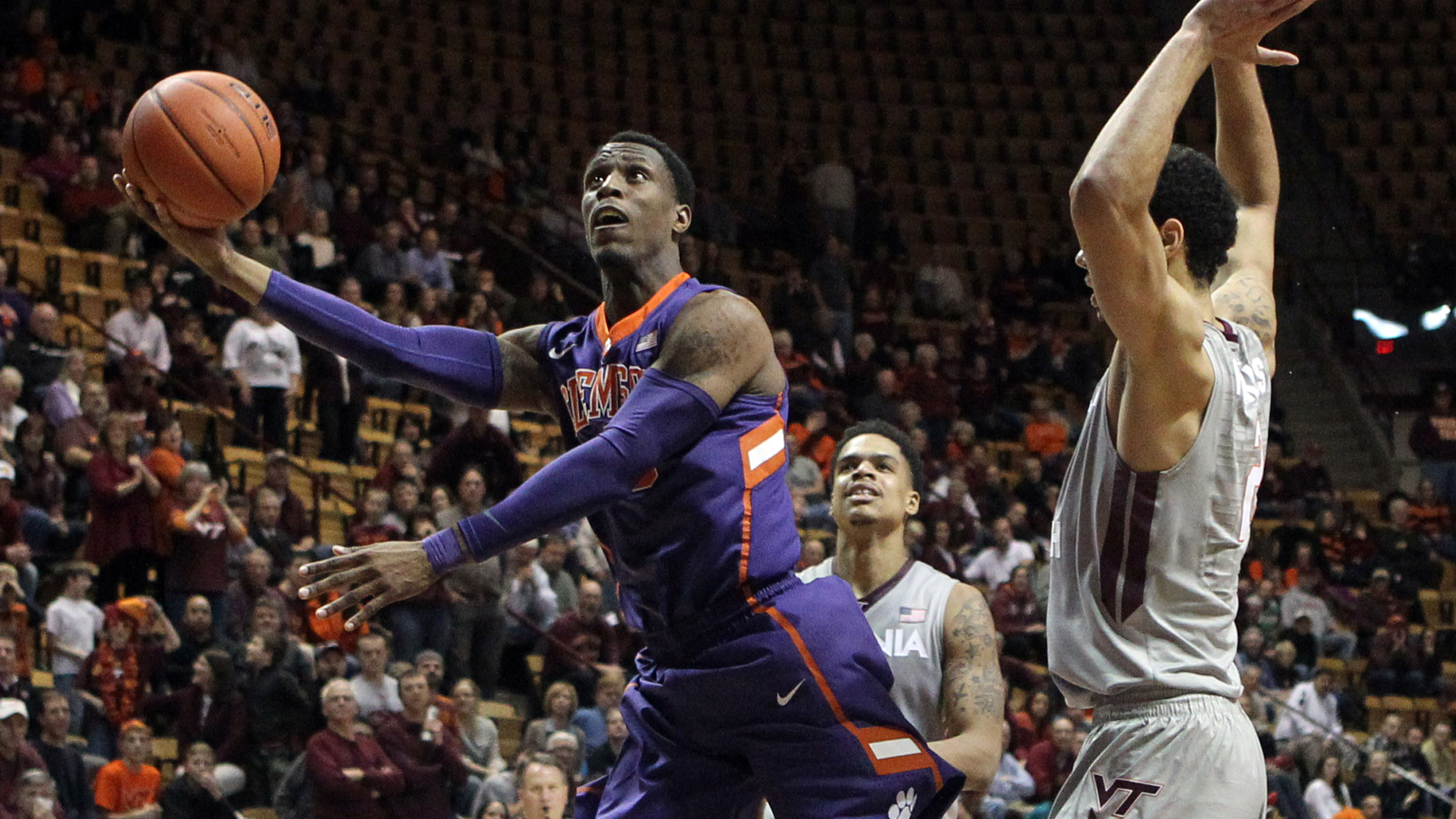 BLACKSBURG, VA – When the Clemson basketball team practices, the first team is in orange and the second team wears purple. It only stands to reason, then, that the second group felt right at home when the Tigers donned purple uniforms on a rare occasion for a game Wednesday night at Virginia Tech.

It made sense afterward, at least.

Clemson outscored the Hokies 19-6 in bench points, led by nine crucial points from sophomore guard Adonis Filer, and ground out a 56-49 win at Cassell Coliseum in a game when the Tigers’ primary scorers needed the help from their supporting cast.

“I thought our purple team was the difference,” Head Coach Brad Brownell said. “Adonis played great. I thought Damarcus Harrison played very well, especially defensively, but then he gave us seven points and hit some big shots. And even Josh (Smith) was good in the 10 minutes that he played. So, I really thought it was appropriate our purple team guys played really well tonight and helped us win.”

The Tigers were in desperate need of someone to make a play, and Filer came off the bench and rose to the occasion.

With the score tied 49-49, Filer got the ball with the shot clock winding down and drove hard into the lane, drawing a foul, getting the hoop and knocking down the foul shot to steady the ship for Clemson.

“I heard Coach B yell, ‘Drive it!’ on the sideline, and I just drove it, and their big man was playing my left hand, so I just went to the right and laid it in,” Filer said.

The Tigers held the Hokies scoreless for the final 1:51 and pulled away from there to give them a modest two-game win streak in ACC play.

“It was real important,” Filer said. “Like Coach kept saying, we needed to validate that us beating Duke wasn’t a fluke. So, we needed to come up here and get a win and let them know that we’re for real – this year is a different year than last year.”

Filer’s nine points were his most against an ACC team since he had 13 at Virginia Tech last season.

He drained a wing three and took a charge on the other end to helps the Tigers take a 25-24 lead into halftime, but Virginia Tech quickly rallied out of the break to grab its largest lead of the game at 36-30.

Smith ended the Hokie run with a tip-in, and Harrison drained a three from the wing to pull Clemson back within one with 12:40 to go.

“I just wanted to come off the bench and give the team some juice and give us some energy to play harder, defensively and offensively,” Filer said.

Later, McDaniels became the first Tiger to reach double figures in scoring when he rattled home a three-pointer to make it 49-43 with 4:07 to go, but the Hokies went on a 6-0 run from there to tie the game, which set the stage for Filer’s big play.

“(The coaching staff) talked about in one of the timeouts that maybe we needed to go back to our big lineup, and I just said, ‘Let’s stay with the small lineup. Let’s keep K.J. at the four, stay spread out and try to attack,'” Brownell said. “Adonis is probably the guy that we would’ve taken out if we had done it. And he made a huge drive and a huge play, and then made the free throw, which is special.”

After he scored the layup, Filer swung his arm emphatically as he was mobbed by his teammates. After a timeout, he calmly stepped to the line and made the foul shot.

“I was pretty hyped,” Filer said. “We needed it. We needed some energy. We needed a little boost to let us know that we were going to secure this game.”

Filer and Harrison combined to score 16 points off the bench – and went 3-for-4 from three-point range – with starting two-guard Jordan Roper struggling through a 1-for-6 shooting night, while Smith also contributed three points and five boards.

“Our bench has to earn their minutes,” Brownell said. “They have to continue to play well to deserve some more minutes, and those guys have. I probably should have given Sidy (Djitte) some more minutes in the second half today, but we went with Josh.  It’s crucial that our second-line guys really play well for us and give us the juice off the bench.”

That juice turned out to be the difference Wednesday.