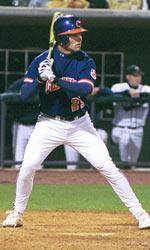 Clemson, SC – Eight current Tigers were selected in 2002 June Major League Draft, tied for the most ever in Clemson history. The list includes five Tigers taken in the first seven rounds, including first-rounder Khalil Greene and second-rounder Michael Johnson, both picked by the San Diego Padres’ organization.

The 1980 and 1996 Tiger teams had eight players taken as well. The 1980 team was led by future Major Leaguers Mike Brown and Tim Teufel, while the 1996 team had future big leaguers Kris Benson, Billy Koch, and Ken Vining. The 1979 team saw nine Tigers either drafted or sign free agent contracts, but only seven Tigers were drafted. The 1995 team had seven players drafted as well.

Six Tigers were taken on the first day of the draft, which was Tuesday. Jarrod Schmidt and Ryan Childs were picked Wednesday. The draft lasted 50 rounds and saw 1,482 players taken. The following is a list of Clemson’s 2002 players who were taken in this year’s draft.