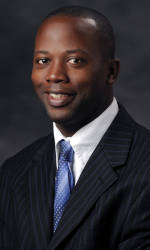 “He’s a rising star in our business because of how hard he works and the contacts he makes in recruiting. He’s a great father and is a guy who has a good knowledge of the game. He’ll be able to help our perimeter players with different skill sets.”

Grant spent six years working under Gregg Marshall, first at Winthrop and then at Wichita State. He helped the Eagles to three consecutive Big South championships and three straight NCAA Tournament appearances. In 2004-05, the Eagles were 27-6 overall. The next season, Winthrop finished the year with a 23-8 overall record and came within two points of upsetting Tennessee in the NCAA Tournament. In 2007, Grant helped the Eagles to a 29-5 overall record and unblemished 14-0 mark in Big South play.

The 2007 campaign was a memorable one for Winthrop. With Grant’s assistance, the Eagles claimed a 74-64 upset over No. 6 seed Notre Dame in the opening round of the NCAA Tournament. It was Winthrop’s first-ever NCAA Tournament win in seven tries. Grant had a positive effect on the play of guard Torrell Martin, one of the Eagles’ top players in history.

“In order for me to leave Wichita State, it had to be a unique situation,” Grant said. “It had to be with a guy that was a really good person and a really good basketball coach, who had a chance to be successful. It’s a dream come true for me because I’m from Charleston. I’ve followed the Clemson program through the years. If there was one school I was going to come to in the ACC that I felt I could be successful at and really embrace, it was Clemson.”

Grant was a part of Marshall’s staff at Wichita State from 2007-10, when the Shockers made gradual improvement each season. In 2008-09, Wichita State made its first postseason appearance in three years and also defeated one of the nation’s top mid-major programs in Siena during the regular season. In 2009-10, Wichita State improved its win total by eight and finished 25-10 overall, 12-6 in the Missouri Valley Conference. The Shockers advanced to the championship game of the conference tournament and also earned a bid to the National Invitation Tournament.

Prior to joining Marshall’s staff at Winthrop, Grant was an assistant coach at The Citadel from 2002-04. Grant played two years at the Division II level at Georgia College in Milledgeville, GA. He led the school to two appearances in the NCAA Tournament and to consecutive Peach Belt Conference championships (1999, 2000). In 2000, the Bobcats advanced to the Elite Eight of the Division II national tournament.

Grant earned an undergraduate degree in psychology from Georgia College in 2000. He and his wife, Jacklyn, have two sons: Earl III (3) and Eyzaiah (2).