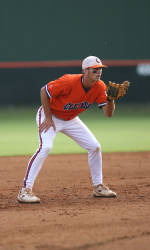 Lefthander Christopher Manno struck out 12 batters and Duke broke open a close game with five two-out runs in the sixth inning to defeat Clemson 10-1 in front of 1,567 fans at Jack Coombs Field on Saturday afternoon. The Blue Devils, who evened the series 1-1, improved to 27-13 overall and 6-13 in the ACC. The Tigers fell to 19-20 overall and 7-13 in ACC play.

Manno (4-0), making his first ACC appearance of the season, set a career high for strikeouts with 12 in just 5.2 innings pitched. He allowed only four hits, no runs, and three walks in throwing 112 pitches to earn the win. Alex Hassan recorded his fifth save of the season, as he gave up one run on three hits in 3.1 innings pitched.

The Blue Devils took the game’s first lead in the second inning thanks to a Tiger miscue. Jonathan Nicolla led off with a single to right-center. Kyle Kreick followed with a single through the right side on a 1-2 pitch to move Nicolla to second. Jake Lemmerman’s sacrifice bunt advanced the runners up a base. After Ryan McCurdy fouled out for out #2, Kreick scored on a passed ball.

Duke put its first two batters on base again in the third inning. Leadoff batter Matt Williams reached when he was hit by a pitch on a 2-2 count. Nate Freiman followed with a line-drive single to center. Duke loaded the bases with no outs when Jeremy Gould was hit by another pitch. Gabriel Saade then hit a one-hopper right at shortstop J.D. Burgess, who dropped the ball. If Burgess would have caught the ball, he would have retired Freiman at third, then he could have had Williams in a rundown between third and home, as Williams froze on the hard-hit ball. But Williams scored on the play and Duke still had the bases loaded with no outs. However, Stoneburner struck out Nicolla and got Kreick to ground into a 1-2-3 double play to keep the Tigers down by only two runs.

The Tigers came right back and threatened in the top of the fourth inning. Jeff Schaus led off with a single through the right side. Two batters later, Kyle Parker laced a single through the left side. Wilson Boyd’s walk loaded the bases with one out. But Ben Paulsen struck out looking and Sanders also struck out to end the inning.

In the fifth inning, Freiman smashed an opposite-field, solo home run down the right-field line to up Duke’s lead to 3-0.

Duke added to its lead in the sixth inning with five two-out runs. Tom Luciano led off with an infield single. Two batters later, Lemmerman reached on a fielder’s choice, as Luciano was retired at second base. With two outs, Stoneburner hit the next two Blue Devils to load the bases. Williams unloaded the bases with a three-run double to right-center. It was Duke’s first hit with runners in scoring position in the series. Freiman followed with another opposite-field home run, this time scoring two runs, to increase Duke’s lead to 8-0. It was his second long ball of the game and seventh of the season.

The Tigers finally dented the scoreboard with one run in the seventh inning. Sanders led off with a double to left-center. Two batters later, pinch-hitter John Hinson flied out to deep center, as Sanders tagged up and went to third. Luciano’s throw back to the infield was errant, allowing Sanders to round third and score.

The Blue Devils added two insurance runs in the eighth inning. Lemmerman led off with a single through right side. McCurdy reached on a throwing error by Hinson, and both Lemmerman and McCurdy advanced a base on the errant throw. Hassan followed with a single through the right side to score Lemmerman and move McCurdy to third base. Williams then reached on a fielder’s choice, as McCurdy scored.

Freiman led Duke’s 10-hit attack by going 3-for-3 with two homers, three RBIs, a walk, and hit-by-pitch, as he reached base in all five of his plate appearances. Williams added four RBIs as well.

Schaus had two hits for the Tigers, who totaled seven hits in the contest.

Clemson and Duke will play the series-finale on Sunday at 1:00 PM.