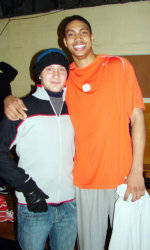 Rising sophomore David Potter spent the week of May 6-13 in Argentina playing basketball on a missions trip with SCORE International. Potter and eight other players from various colleges in the Southeast stayed at the Word of Life School in San Miguel del Monte. The team played five games in five days and ended their week with a perfect 5-0 record against club teams from Argentina.

Among his teammates on the trip were Bryce Sheldon, Mitchell Carter, and Chad Gray from in-state school South Carolina, Phil Turner and Jarvis Varnado of Mississippi State, and Jermaine Beal of Vanderbilt.

The SCORE team defeated the Boca Juniors Club team in the first contest of the week, 86-79. In the second game, Potter and his teammates downed Ramos Mejia by a score of 98-85. The third game of the week featured an Obras Sanitarias team that featured several members of the 2004 Argentinean national team. SCORE International won that contest, 95-92. Potter hit the tying three-point shot late in the game to help propel the U.S. to the victory. SCORE won the fourth game over Huracan de San Justo, 112-99, and the final game of the week, 93-80, over Club Argentina.

Potter’s top game for the week came against Huracan de San Justo, where the native of Severn, MD posted 19 points and four rebounds. In the third game of the week, versus Obras Sanitarias, he scored 17 points and added four rebounds and a pair of steals.

Potter is not the only Clemson basketball player headed overseas this summer. Cliff Hammonds is slated to compete with USA Basketball’s Athletes in Action later this summer in Taiwan.