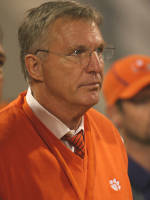 There have been some concerns expressed about having two Football Championship Subdivision (Division 1-AA) teams on Clemson’s football schedule in 2008. And, these concerns have merit. I would like to use this column to briefly explain the dynamics of putting together the 2008 schedule.

To begin, Central Florida contacted us two years ago, wanting to void their contract because of needed changes with schedules and conference affiliation. We told them if we could find a comparable or better team, then we would release them from the contract.

Nothing materialized until ESPN got involved with putting together a possible game between Clemson and Alabama. The network was looking for a primetime, Saturday of Labor Day weekend game that would attract national attention.

In our decision-making process, we believed the national exposure was of significant worth so long as we were not unduly impacted financially. We made the decision to play Alabama because of the very significant national exposure afforded. However, we understood that it meant we would be playing six home games.

I talked with Clemson mayor Larry Abernathy about the effects on businesses and he was very understanding of the situation. Certainly, there would be an economic impact, but he believed the business community understands the realities of scheduling. Nonetheless, we both recognize the significant economic impact on everyone when a home game is lost.

Then, Louisiana Tech unexpectedly contacted us, asking us to help them with an opportunity they had to play Mississippi State. When they asked us to provide relief from the contract, we immediately got on the horn to find a replacement.

It is very important for people to know that we turned every stone that could be turned to find a football Bowl Subdivision team. From the West Coast all the way through the country, schools were contacted. Every effort was made to get a Division 1-A team to come.

At this late date, they were just not there.

For example, we contacted a couple of Sunbelt schools that were in games that would not count toward their conference standing. We thought if we significantly increased the guarantee beyond what we normally pay, we could get one of those 1-A teams to come.

However, the home team had only five home games. As a result, they could not agree to give up a home game.

We simply could not get a fit.

We essentially traded Central Florida for Alabama for the national opportunity and then traded Louisiana Tech at Shreveport for South Carolina State to get another home game.

On balance, we believe it is the correct decision given the strengthening of our schedule with Alabama and the attendant national exposure – plus, allowing us to retain seven home games. Obviously, this is a one-time situation.