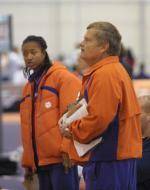 The Clemson men’s and women’s cross country teams will travel to Greenville, NC to take part in the NCAA Southeast Regionals on Saturday. The event will take place at the Lake Kristi course and is scheduled to begin with men’s racing at 11:00 AM followed by the women’s start at 12:15 PM.

Lake Kristi, the site of each NCAA Southeast Regional dating to the 2002 season, serves as the home course for East Carolina cross country. The course has also played host to other prestigious cross country meets, including the 2001 Conference USA Championships, 1996 Colonial Athletic Association Championships, and several North Carolina Intercollegiate events.

Clemson’s men’s team will be one of 36 competing in Saturday’s race. Leading the way this entire season has been Eric Soder have also run well for the Tigers this season, with both scoring in three of four events. Sophomores Greg Isaacs and Sean Reilly had solid finishes at the ACC meet last month and finished second and third on the team in that race.

The Clemson women will be one of 39 teams competing. Leading the way for the Lady Tigers has been senior Jennifer Barton. She has scored in each event for Clemson and has posted three top 10 finishes this season, including a victory in the season-opening Gamecock Invitational. Clemson has featured multiple freshmen in its lineup this season, including Elizabeth Embler, Ashley Robinson. Also performing well this year has been Patrice McMillan, a middle distance runner on the track team.