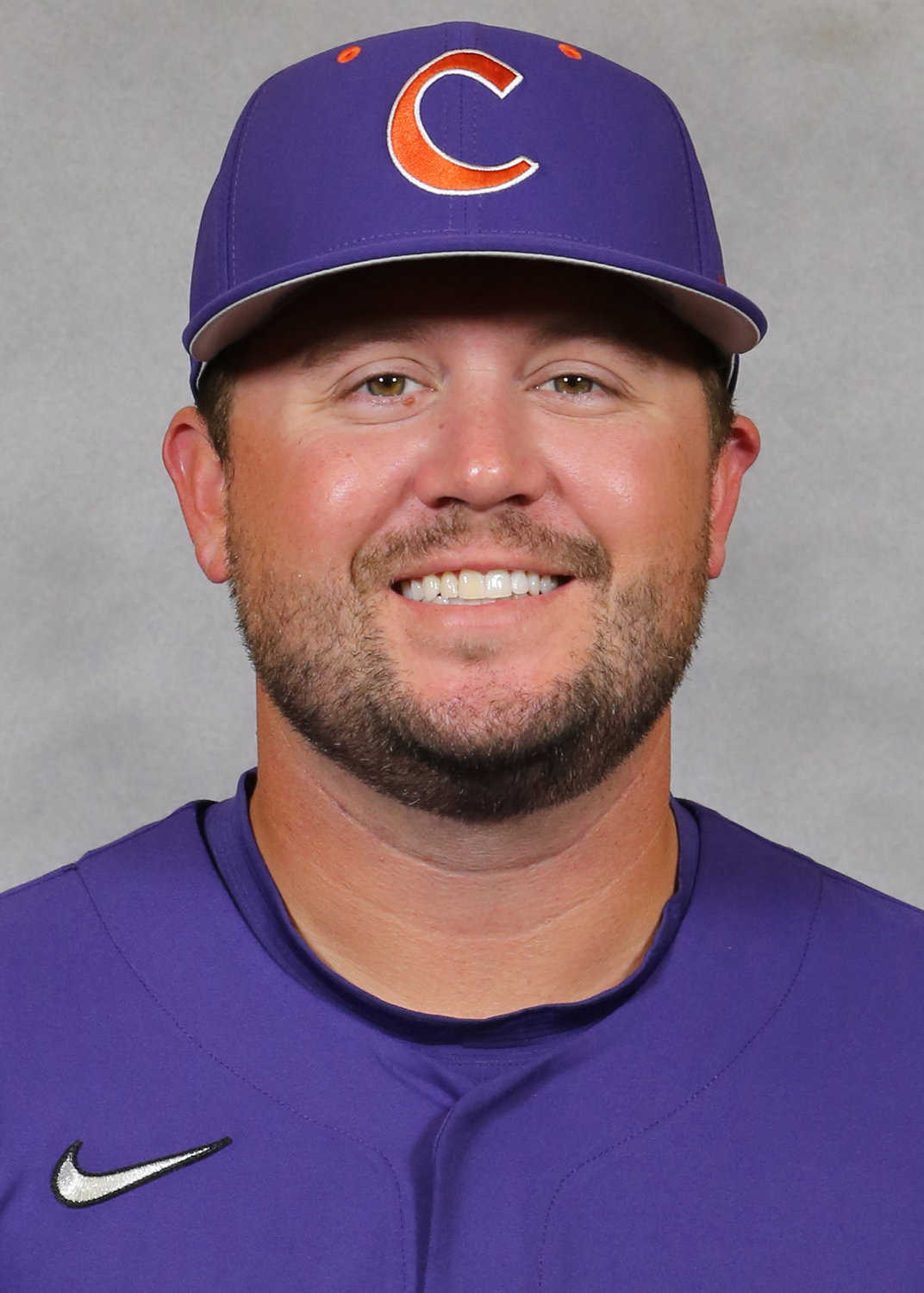 Jared Broughton completed his third year with the Tiger program as volunteer assistant coach in 2022. He was the associate head coach at Piedmont, a Division III school in Georgia, from 2017-19. Broughton joined the Piedmont staff after a three-year stint as an assistant coach at Earlham (Division III) in Indiana.

The 2022 team had a 35-23 record and totaled 100 home runs and a .973 fielding percentage, both third highest in Tiger history. Clemson had 13 top-25 ranked wins, the most by a Tiger team since 2010, and was 5-0 against SEC teams. Max Wagner, a Dick Howser Trophy finalist, earned ACC Player-of-the-Year and first-team All-America honors by hitting .369 with 27 homers, 76 RBIs, 66 runs, an .852 slugging percentage and a .496 on-base percentage. Blake Wright earned Third-Team All-ACC honors as well.

In 2021, Clemson had a 25-27 overall record, but it was only a few wins shy of earning an NCAA Tournament berth due to playing one of the most difficult schedules in school history. Caden Grice and James Parker earned Second-Team All-ACC honors in 2021, while Grice was a freshman All-American who hit .317 with 15 homers and 53 RBIs. Parker hit a team-high .324 and was one of six Tigers selected in the draft.

The 2020 Tigers had a 14-3 record, but the season was suspended March 12 and later canceled due to a coronavirus (COVID-19) pandemic. Clemson, who had 26 stolen bases in 17 games, ended the season ranked as high as No. 19 in the nation. Clemson’s sophomore-laden lineup in 2020 was led by sophomore Kier Meredith, who hit .364 with a .465 on-base percentage.

Broughton helped guide the Lion program to a USA South Athletic Conference title in 2019 while helping to develop one of the most decorated players in program history, Brady Ballstadt.

Broughton helped guide the Lions to impressive marks, including being ranked as high as No. 10 in the nation and earning the top seed in the USA South Athletic Conference Tournament. The Lions had a 29-10 record in 2019, posting a 19-3 mark in league play. Six Lions earned USA South Athletic all-conference honors, and four players earned ABCA All-Region honors.

In his first two seasons, Broughton helped Piedmont to two straight USA South Athletic Conference Tournament runs, including in 2017 as the No. 8 seed. The Lions won four-straight elimination games to make it to the title game. He also led Piedmont to 126 stolen bases in 2017, second in the country, and the Lions totaled 144 stolen bases in 2018 with the assistance of Broughton, who was a speaker on basestealing at ABCA Barnstormers Clinic at Georgia in October 2018.

In three seasons as an assistant coach at Earlham, Broughton helped the program improve its win total each year, moving from a 21-18 record in 2014 to a school-best 29-14 record in 2016.

Broughton played his final two seasons at Dayton in 2012 and 2013 after receiving a medical redshirt in 2011. He helped the Flyers to 31 wins in 2012, including a 17-7 mark in the Atlantic 10 Conference. He also helped the Flyers to their first Atlantic 10 Conference Tournament championship in 2012 and the program’s debut in the NCAA Tournament. Dayton, who led the nation with 164 steals, played in the College Station (Texas) Regional.

Before enrolling at Dayton, Broughton played two seasons (2009,10) at Vincennes, a member of the National Junior College Athletic Association, in Indiana. He began his reputation for helping programs to firsts at Vincennes, as he guided the program to its first appearance in the NJCAA World Series in 2010 with a 30-21 record.

The Trailblazers were region champions in 2010, as Broughton was named region MVP after hitting a walkoff homer in the region tournament title game. He was later named an NJCAA All-American. Broughton also played at and graduated from Lutheran High School in Indianapolis, Ind.

He graduated from Dayton in May 2013 with a degree in economics. He was also named a Presidential Scholar-Athlete Award nominee in his final semester at Dayton.