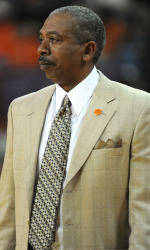 ATLANTA, GA – Clemson University basketball coach Oliver Purnell is the recipient of the 2010 Coaches vs. Cancer® Champion Award, presented annually to a college coach who has been vigorously engaged in the program’s fundraising, education and promotional initiatives and has demonstrated leadership in the fight to save lives from cancer and embolden the American Cancer Society’s vision of a world with less disease and more birthdays.

Coaches vs. Cancer is a collaboration between the American Cancer Society and the National Association of Basketball Coaches (NABC) that empowers coaches, their teams and communities to join the fight against cancer.

Purnell’s commitment to fighting cancer is evident on a number of fronts. In 2008, he and his wife, Vicky, created TigerFest, a barbecue fundraiser that engages the Clemson athletic and university community and fan base, and which has raised $225,000 for Coaches vs. Cancer in the past two years. As well, in September 2009, Purnell joined four other NCAA men’s basketball coaches at an American Cancer Society Cancer Action Network (ACS CAN) Capitol Hill rally in Washington, D.C., to urge Congress to pass meaningful health care reform legislation to expand access to care for those facing cancer.

Purnell is also a member of the Coaches vs. Cancer Coaches Council, comprised of NABC members, American Cancer Society volunteers and business leaders across the nation who explore innovative ways to fund the fight against cancer and send a powerful message that it can be won.

“The American Cancer Society, through its alliance with the NABC, is pleased to honor Coach Purnell for his remarkable work with Coaches vs. Cancer and its commitment to help save lives. Coach Purnell has seen the impact of cancer on his own family, having lost several members to the disease, and he has taken up the charge to do whatever he can to benefit so many other people who share the cancer experience. We salute him and his wife Vicky for all they are doing to further the American Cancer Society’s mission of saving lives by helping people stay well and get well, by finding cures and by fighting back,” said George W.P. Atkins, 2009-10 national volunteer chair, American Cancer Society Board of Directors.

The American Cancer Society combines an unyielding passion with nearly a century of experience to save lives and end suffering from cancer. As a global grassroots force of more than three million volunteers, we fight for every birthday threatened by every cancer in every community. We save lives by helping people stay well by preventing cancer or detecting it early; by helping people get well by being there for them during and after a cancer diagnosis; by finding cures through investment in groundbreaking discovery; and by fighting back by rallying lawmakers to pass laws to defeat cancer and by rallying communities worldwide to join the fight. As the nation’s largest non-governmental investor in cancer research, contributing about $3.4 billion, we turn what we know about cancer into what we do. As a result, more than 11 million people in America who have had cancer and countless more who have avoided it will be celebrating birthdays this year. To learn more about us or to get help, call us anytime, day or night, at 1-800-227-2345 or visit cancer.org.