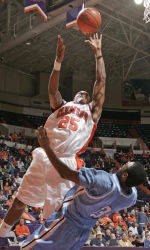 Coach Oliver Purnell on North Carolina “I think what we have is an important game for both teams, because both teams are coming off difficult losses on Saturday. Obviously that kind of thing is going to happen in this league an awful lot, losing games that you should have won or maybe wanted to win very badly but yet you don’t have the luxury to dwell on it because you’ve got an important game coming up.

“North Carolina has played some wonderful basketball this season, certainly one of the top five running teams in America so transition defense is critical. Felton can push the ball so well that he can get to the basket himself. He’s got Sean May on the interior so if he tries to spread it and reverse and go inside, there’s none better. Then McCants is an obvious match up nightmare, we had that problem last year, we did a decent job with him here at home although we still had match up problems with him and simply couldn’t match up with him up there.

“This rendition of the North Carolina team is much deeper than last year, very very deep. You don’t even talk about Jawad Williams and he’s their leading scorer. The other Williams, the freshman comes in. He’s going to be a terrific player, he’s already a very solid player and you can go on and on to about eight or nine players.

“I think our ability on offense to screen them and execute is going to be important. Obviously trapping, the scramble trap is a big part of what they do in their system. We hurt them last year with that and I anticipate seeing a lot of that, but they are a very good man-to-man team, so if you don’t screen them it’s hard to reverse the ball. So we have to screen them and execute on the offensive end of the floor. They’ve got to make a decision on whether they want to double down on Sharrod (Ford) or not because of the way we, particularly Shawan (Robinson), shot the ball last year. I anticipate they may go straighter man-to-man.

“Defensively, we’ve got a match up problem. May is awfully tough and Sharrod has been getting in foul trouble. McCants, I’m not sure how we match up with him so we have to make some decisions there. I think with our young team we’re going to play defense the way we’ve been playing it, hopefully much better. We have to limit our turnovers, execute and try to win that way.”