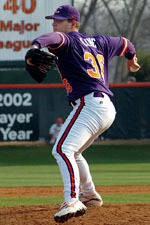 Clemson, SC – Stephen Clyne pitched 5.1 scoreless innings of relief to lead #2 Clemson to an 8-3 win over Pacific Friday afternoon in front of 4,459 fans at Doug Kingsmore Stadium. Clemson, who leads the series 1-0, improved to 4-1 overall, while Pacific fell to 4-7.

Clyne (1-0) pitched 5.1 scoreless innings in relief of starter P.J. Zocchi, allowing only three hits and striking out five with one walk to earn the victory. It was a career-long outing for the Parkland, FL native, besting his previous high of 4.0 innings pitched.

Pacific opened the scoring with a run in the third. Joe Oliveira led off with a walk and advanced to second on a wild pitch. With one out, Justin Baum tripled to right field, plating Oliviera.

Pacific found the scoring column again in the fourth to push the lead to 3-0. Zach Chamberlin singled through the right side to lead off the inning and then advanced to second on a wild pitch. He reached third on groundout by Erik Hamren and then scored on wild pitch. With two outs, John Joines homered to left field, putting Pacific on top 3-0. It was Joines’ first homer of the year.

Clemson’s comeback began when Doug Hogan hit a home run to left-center to open the fifth inning. With two outs, Brad Chalk singled to right field and advanced to second on a wild pitch. After Hamren dropped what would have been the third out in foul territory near the left-field line, Taylor Harbin made Pacific pay for the error with a double to left-center, plating Chalk. After D’Alessio walked, Marquez Smith singled through the left side, plating Harbin to tie the score 3-3.

Brad Chalk singled to shortstop. With the bases loaded and one out, Harbin singled to right field to score Hogan. Johnson then scored on a wild pitch, which also advanced Chalk and Harbin up a base. With two outs, Smith singled through the left side, plating Chalk and Harbin. Smith had a game-high three RBIs.

Due to the threat of inclement weather on Sunday, Clemson and Pacific will play a doubleheader on Saturday starting at 2:00 PM. There will be 45 minutes in between the two nine-inning games.