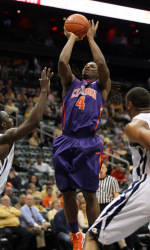 Note: Over the next few days, ClemsonTigers.com will take a look at the men’s basketball team’s offseason player development program for the rising sophomore class. Our second feature is guard Rod Hall, who played in every game in 2011-12 and averaged 16.7 minutes per game, most among Clemson’s freshmen.

CLEMSON, SC – Clemson men’s basketball coach Brad Brownell has many question marks surrounding his 2012-13 team as he and his staff continue to conduct individual skill workouts the rest of spring and into the summer. But if there’s one player on his roster he knows what he’s going to get on most nights, it’s rising sophomore Rod Hall.

“When you sign a Rod Hall, you’re signing a guy that is tough and will compete,” said Brownell, who led the Tigers to a 16-15 overall record last season, 8-8 in the ACC. “He will never be known as a shooter, that’s not who he is. He brings energy to practices and brings toughness to the team.”

That was clearly his role as a first-year freshman in 2011-12 when he played in all 31 games and averaged 16.7 minutes per game, most among his four scholarship classmates. Hall started nine games, all during the non-conference portion of the schedule, and averaged 3.8 points per game.

Hall’s biggest moment came in the Diamond Head Classic in December, when he scored a season-high 18 points and scored on a three-point play with seconds remaining to send the Tigers into overtime against Southern Illinois, a game Clemson eventually won.

The Augusta, GA native believes he learned a great deal his first season in Tigertown.

“The process went well for me my freshman year,” Hall said. “I wasn’t used to sitting on the bench, but I did what I had to do to get on the court.”

What he did was play solid defense from the point guard position, which included a role as one of the team’s primary “jammers” in Brownell’s system, meaning he picks the ball up full court after a made basket to try and slow opposing teams.

Hall also showed a knack for finishing plays on the offensive end of the floor due to his physical stature, something that could probably be attributed to his past as a football standout. Hall played both sports his entire life, and his freshman season at Clemson was the first time he focused solely on basketball.

“Rod’s never been a full-time basketball player,” Brownell said. “He’s been an athlete playing basketball. We have to continue to work on his skill level. We’ll continue to make him more comfortable with his shot, and with his ball-handling and decision-making. He’s making strides in those areas.”

The only returning true point guard on the roster, the onus is on Hall to improve his conditioning so he is ready to play extended minutes as a sophomore. In 2011-12, both Tanner Smith and Andre Young played over 32 minutes per game.

Is Hall ready to increase his playing time to those numbers as a sophomore? Not yet, according to Brownell, but he has continued to make progress in the weight room and in conditioning.

“Andre and Tanner were both 30+ minute guys that could make good decisions for an entire game,” Brownell said. “We need to build his strength and stamina, so that he can compete hard for longer minutes. They all want to do it, and think they’re ready to do it. But until you do it, it’s a challenge.”

It’s a challenge that Hall has accepted, and one he looks forward to meeting head-on as the Tigers go through spring and summer workouts.

“Basketball requires a lot more running than football, so I’ve had to get used to the conditioning after being a two-sport guy all my life,” he said. “I knew it would be tough, but I’m getting the hang of it.”