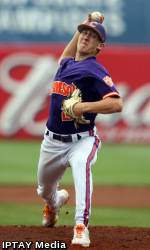 GREENSBORO, NC – It was a heavy moment for Daniel Gossett. Here he was, a true freshman, pitching in his first ACC Tournament game. His nerves got the best of him, at that moment.

But that was before the start of Clemson’s game against the University of Virginia Thursday at NewBridge Bank Park in Greensboro, NC. When the game started, he caught his breath, and for the second straight week pitched a gem of a game for the fifth-seeded Tigers.

The righty pitched 6.2 innings, while yielding only one run off four hits. He also had six strikeouts.

“I felt like if I could step back and control my breathing, I’ll pitch my best,” Gossett said. “I pitch best when I’m relaxed. I feel everybody pitches best when they are relaxed. That is what I work at. I just want to stay relaxed.”

Unfortunately, Gossett’s outing went for naught, as No. 4 Virginia rallied to score two runs in the bottom of the eighth inning to down the Tigers 3-2. With the loss, Clemson drops to 0-1 in Pool A of the ACC Tournament, and will need to win both of its remaining two games – Friday vs. Florida State and Saturday vs. Georgia Tech – and hope for two Virginia losses, in order to advance to the ACC Championship Game on Sunday.

But despite the loss, it’s still hard not to notice how far Gossett has come. Clemson head coach Jack Leggett and pitching coach Dan Pepicelli started the year using the Lyman, SC native as reliever in the later innings. Once he showed he could be counted on in that role, he was moved into a midweek starters’ role.

Gossett settled into that spot, while recording wins over Georgia and Winthrop. But when starter Kevin Brady went down with an injury on April 27 at Georgia Tech, the true freshman’s role changed again. First he was used as a reliever in weekend games, helping Clemson earn wins over Georgia Tech on April 29, the College of Charleston on May 5 and No. 1 Florida State on May 12. He earned a spot on the weekend rotation at Wake Forest and has proven over the last two weeks that he can get the job done.

Against Wake Forest, Gossett pitched 7.1 innings, including six scoreless innings, while recording seven strikeouts. He gave up only two runs.

“What got me in trouble at times earlier in the season, was that the game was moving pretty fast,” Gossett said. “The game was flying past me. So I decided to start stepping off and taking a deep breath and controlling my heart rate. I would then come back and make the next pitch.

“It’s all about taking one pitch at a time. You can’t let them run together. That’s what we have been working on.”

That notion really went into play Thursday. After allowing the Cavaliers to load the bases with two outs in the top of the first, Gossett stepped off the rubber, took a walk around the mound, and then struck out Virginia right fielder Colin Harrington to end the threat.

The only run Gossett allowed came on a two-out single in the bottom of the third inning, but after that he allowed just two more hits as he pitched deep into the seventh inning before giving way to Joseph Moorefield with two outs.

“He pitched really well for us,” Leggett said. “He is a freshman in his first game at the ACC Tournament and he went out there and did an excellent job for us. He got a little tired at the end, and I hate that we could not finish it off (for him).”

And though he wishes he could have stayed in the game a little longer Thursday, Gossett has learned to control his emotions quite well. In fact, he is staying in the moment.

“Sometimes he will cruise,” Pepicelli said. “He has those innings where he looks really good, but when he was getting stuck, he was getting real stuck. I just tried to give him some tools to slow the game back down so he can get back to making his pitches.”