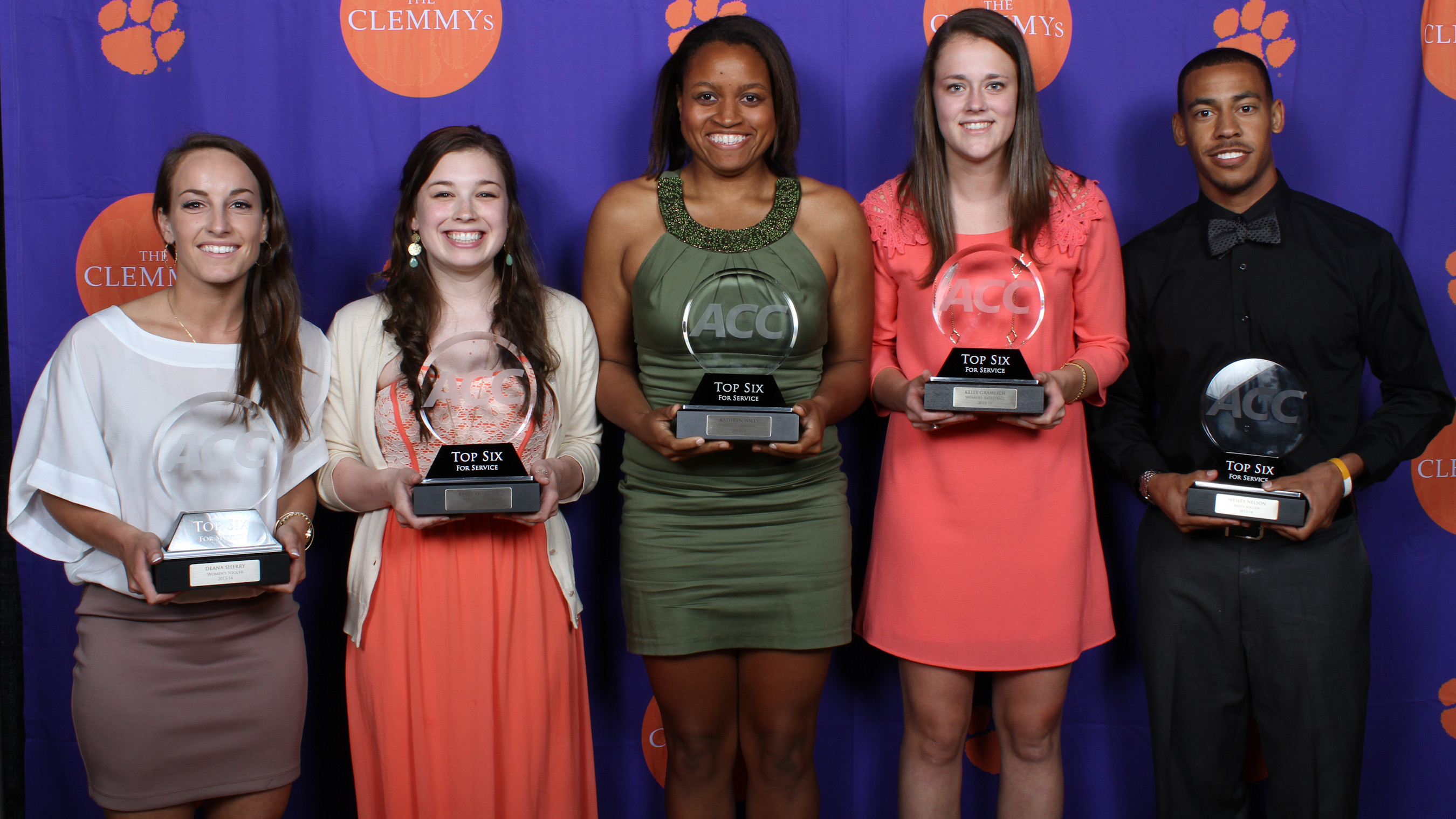 Every spring, Clemson’s Community Relations department nominates six student-athletes for the Atlantic Coast Conference Top Six for Community Service Award. The award goes to six student-athletes from each ACC school that have gone above and beyond in serving their communities. To be eligible for this award, each student-athlete must participate in at least six different community service events.

This year’s winners were announced at the CLEMMYs on April 14, 2014. Each winner received a trophy, and will have their picture displayed along the wall of honor in Vickery Hall. The Community Relations department and the Solid Orange Squad would like to congratulate this year’s winners, who accumulated a combined 404 hours of community service.

Emily Howard – Diving Emily served as the director of the Solid Orange Squad’s T.I.G.E.R! Talk program, a program that partners student-athletes with at-risk middle school students. She has also taken her service beyond Clemson, as she participated in an alternative spring break trip to Honduras. In addition, Emily volunteered for the Be a T.I.G.E.R! Field Day and Special Olympics, and organized a fundraising run for the victims of the Boston Marathon bombing.

Kelsey Igo – Rowing Kelsey served as the director of Be a T.I.G.E.R! Field Day for two consecutive years, and under her guidance, the event has flourished, with more than 1000 children participating each year. As a member of the rowing team, she contributed to the team’s annual Team Up For Clemson Regatta, an event that partners the team with the City of Clemson to teach the community the basics of rowing. Kelsey also participated in the T.I.G.E.R! Pals and T.I.G.E.R! newspaper programs.

Wesley Nelson – Men’s Soccer Wesley served as director of the Solid Orange Squad. In this position he coordinated and kept track of all community service events, and was the primary speaker at numerous speaking engagements. During his four years at Clemson, Wesley participated in Boy Scout Day, the Tiger Cub Birthday Party, T.I.G.E.R! Pals and T.I.G.E.R! Read, as well as numerous tours and elementary school assembly programs and appearances.

Deana Sherry – Women’s Soccer Deana stepped in as the director for all Character Building programs, including Field Day, the newspaper, T.I.G.E.R! Pals, T.I.G.E.R! Talk, and T.I.G.E.R! Read. She wrote all articles for ClemsonTigers.com and My Orange Update. Deana also participated in several Be a T.I.G.E.R! programs, and donated her time to the Greenville Children’s Hospital and Anderson Adult Education Center.

Kathryn Wiley – Rowing Kathryn has served as the Volunteers’ Chair on the Be a T.I.G.E.R! Field Day planning committee for two years. She is responsible for coordinating all student-athlete volunteers, along with their assignments on the day of the event. Kathryn served as Secretary of the Student-Athlete Advisory Committee, where she helped coordinate events such as Adopt-a-Family and Thank-a-Thon for IPTAY Donors. Kathryn also participated in T.I.G.E.R! Pals, T.I.G.E.R! Talk and the T.I.G.E.R! newspaper programs.