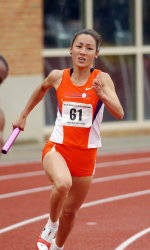 The Clemson women’s track & field team will head to Philadelphia, PA this weekend to take part in the 112th annual Penn Relays from Franklin Field. All track & field events get underway on Thursday, April 27 at 10:00 AM.

Two weeks ago, both Renata Miyamoto posted regional marks in the 100m high hurdles. Last weekend at the ACC Championship, both recorded regional marks once again in that event. Hardy ranks fourth and Miyamoto fifth all-time in school history in that event with times of 13.71 and 13.72, respectively. A third hurdler that has qualified for the East Region Championships next month is sophomore Sierra Hill, who posted a personal-best 59.58 time in the 400m hurdles en route to a fourth-place finish at ACCs last weekend.

In the triple jump, Miyamoto holds the top mark on the Clemson team at 41’0.5″. She accomplished that career-best last weekend and scored in that event for the Lady Tigers at the conference meet. Also posting a regional mark in that event from Clemson is Michelle Rogers, a junior from Dacula, GA.

The throws have been an area of strength for Clemson this season. Della Clark earned All-ACC honors a week ago in the hammer throw with a personal-best toss of 185’4″, which ranks second in school history. Freshman Krystal Woods, a senior. She hit a mark of 144’7″ in the season-opening Weems Baskin Relays in March.