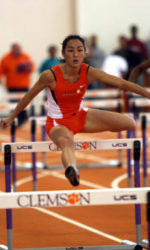 In the 4x100m relay, the team of Renata Miyamoto, Hinton, Ope Sobanjo, and Tia Perry finished third and just missed a regional-qualifying mark with a time of 3:42.56.

In the triple jump, Miyamoto posted her career-best with a leap of 41’0.5″. Her mark was a regional qualifier and good enough for seventh place. Michelle Rogers was 10th in that event at 39’4″. Anni Korhonen just missed scoring for the Lady Tigers in the high jump after tying her personal best at 5’5″. Also competing in that event for Clemson was Katie Farnan, who cleared 5’3″.

Krystal Woods competed in both the discus and javelin throws on Saturday. She was 13th in both events. She had a toss of 144’3″ in the discus. Catheryne Porter had a throw of 126’0″ in the discus as well.

The Lady Tigers return to action next weekend, April 27-29, to compete in the Penn Relays at Philadephia, PA.