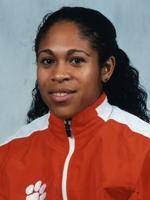 RALEIGH, N.C. – The Clemson women’s track and field team qualified four student-athletes for the East Region Championships at the Raleigh Relays held this weekend. The Lady Tigers won the pole vault and triple jump, and finished second in the long jump and 1500m run.

Gisele Oliveira was also an event winner for Clemson, posting a Lady Tiger record leap of 43’6.5″ in the triple jump. Oliveira qualified for the region meet with that mark, and also qualified in the long jump. She recorded a mark of 19’10.75″ in the long jump, another personal-best mark. She is Clemson’s all-time leader in the triple jump and ranks fifth in the long jump. Silja Ulfarsdottir and Shakirah Rutherford also qualified for the East Region Championships in the 400m hurdles with times of 1:00.49 and 1:00.72, respectively. With those times, Ulfarsdottir placed fourth, while Rutherford took fifth.

Off the track, Allison Bradshaw recorded a mark of 42’8.75″ in the shot put. Krystal Woods posted a throw of 147’5″ to place eighth in the discus, and Mary Gosselin recorded a personal-best throw of 152’11” in the hammer throw. Gosselin’s mark in the hammer moves her into third on Clemson’s all-time list in that event.

Clemson women’s track and field returns to action next Saturday, Apr. 5, at the Clemson Invitational.