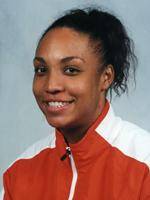 CLEMSON, SC – The Clemson women’s track and field team opened its outdoor season at the Savannah State Invitational earlier this week. Krystal Woods led the Lady Tigers with her mark of 123’6.5″ in the javelin throw, a mark that ranks fourth on Clemson’s all-time list in the event.

Gisele Oliveira won three field events for the Lady Tigers. In the high jump, Oliveira cleared 5’4″ to claim the event, while Allison Bradshaw finished second in the shot put with a mark of 40’9″, while Mary Gosselin and Woods were fourth and fifth with marks of 36’8″ and 35’2″, respectively. Woods won the discus throw with a mark of 131’11”, and Gosselin placed fourth with a mark of 114’8″. Bradshaw and Elizabeth Lord also placed in the event, finishing sixth and seventh with marks of 101’4″ and 95’11”, respectively. In the javelin throw, Woods won the event with her mark of 123’6.5″. Lord placed second with a mark of 112’7″, followed by Pickett and Haughton’s marks of 102’4″ and 93’4″.

The Clemson women’s track and field team returns to competition this Saturday at the Clemson Relays.