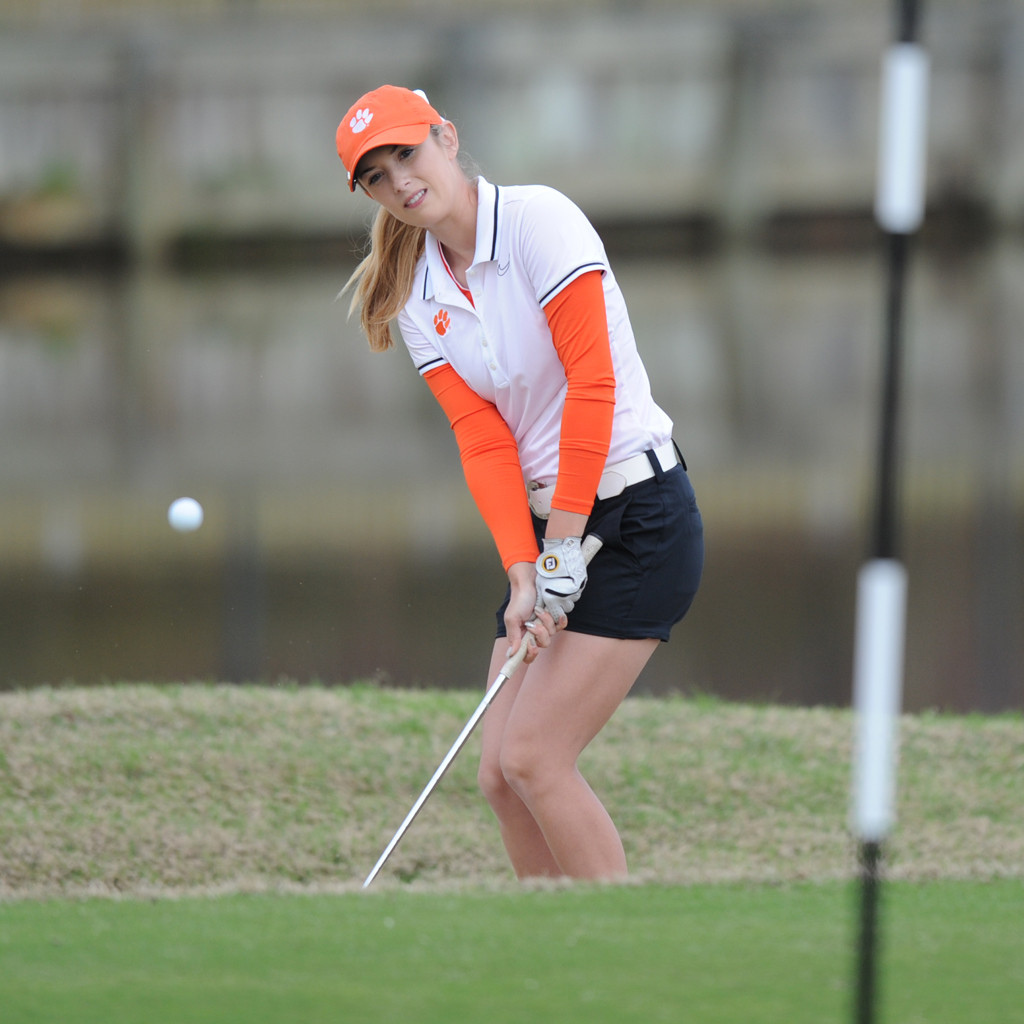 Clemson’s inaugural women’s golf season would have to be termed outstanding in just about every area of an evaluation.

J.T. Horton’s 2013-14 team finished 14th in the final Golf World Coaches’ poll, the second highest final ranking in Clemson athletics history for a first-year program.  On St. Patrick’s Day, 2014, just seven months into the program’s existence, the team was already ranked in the top 10 in the nation.

With an all freshman roster, the Tigers finished in the top five in each of their first eight tournaments, including three runner-up finishes in tournaments that included many nationally established programs.

How tough was that schedule?  During the season Clemson competed in tournaments against 21 of the 24 teams that reached the NCAA National Tournament, and had a 29-17-3 record against those teams in the regular season, including an 11-2-2 record against the teams that finished 6-10 at the NCAA Championship.

The first-year program boasted an All-American, two first-team All-ACC performers and four players who finished among the top 200 players in the nation according to the final Golfweek and Golfstat rankings.

And off the course, three Tigers were named to the Academic All-ACC team and five had a 3.0 or better for the academic year.

Despite being the only first-year program in the country to be selected for the NCAA Regional Tournament, Horton was disappointed in the team’s finish. The Tigers were ninth at the ACC Championships and 13th out of 24 teams at the regional.

“One thing we did not have last year was competition within our team to qualify for tournaments,” said Horton. “We had the same lineup the entire year and that probably had an impact on our finish. That won’t be the case this year.  We have two freshmen who have joined the team who will push the returning players and it will make for some competitive qualifying throughout the year.”

Horton must replace All-American Ashlan Ramsey, who decided to turn professional after her freshman year. Ramsey had a team best 72.91 stroke average for the year and finished in the top 10 in six of the 11 tournaments. Seventeen of her 32 rounds were at par or better and she won two tournaments, the Lady Paladin Invitational and the Ruth’s Chris Tar Heel Invitational in Chapel Hill, N.C.

Ramsey was the top ranked amateur in the world according to Golfweek for the entire academic year and was chosen to the United States Curtis Cup Team. She was one of the final 10 candidates for the Annika Award, which goes to the top women’s golfer in the nation.

“Ashlan had a great season and  brought a lot of notoriety to our program,” said Horton. “She was a great representative of our program and was the biggest reason we were able to finish in the top 15 of the Coaches’ poll in our first season.

“We will miss Ashlan, but I believe we will be more balanced this year. We may have different players at number-one throughout the year. That might not be a bad thing.  We will have competition for that top spot and just to get in the lineup.

“We had a set lineup all last year, but this year the players will be pushed. They can’t be complacent and will have to qualify for their spot each tournament. The competition inside the team will make this team better.”

Four starters return for Horton’s team that burst on the national scene with a second-place finish at the 20-team Cougar Classic last year in early September.

The Tiger with the top resume among the returnees is sophomore Sloan Shanahan. The native of Suwanee, Ga had a 73.97 stroke average as a rookie and was named first-team All-ACC.

Like Ramsey, Shanahan got off to a great start last year and finished in the top 16 in each of her first six events, something even Ramsey did not achieve. That included a second place at the Cougar Classic and a third place at the Lady Paladin. Ten times during the year she had the best round of the day and her score counted in all 31 rounds, the only player who could make that statement.

She was Clemson’s top golfer at the Allstate Sugar Bowl and at the NCAA West Regional. Shanahan was 37th in the final Golfstat computer rankings and 58th according to Golfweek.

McKenzie Talbert had a 75.53 stroke average in her freshman season and played the number-three spot in the lineup most of 2013-14.  The native of Edgefield, S.C. had a pair of top 10s and six top 25 finishes in her rookie year. She shot even-par 216 when she finished sixth at the FloridaState Match-up and was Clemson’s best player at the Battle at the Valley.

Lauren Salazar finished the academic year fourth on the team in stroke average for the year (just one total shot behind Talbert), but she was the most improved player in the spring vs. the fall. She had the third best stroke average on the team in spring tournaments and was just 0,4 strokes per round out of second.

The native of California was the only player on the team with three top 10 finishes in the spring and her average finish for the six regular season spring events with 21st. The only player from outside the southeast on the roster had her score count in 28 of 32 rounds last year.

Jessica Hoang played the number-five position most of last year and finished with a 78.91 stroke average.  She showed her capabilities in the final two rounds of the Sugar Bowl when she had consecutive rounds of 73-74 and helped Clemson to a fifth-place finish. Hoang, who was fifth in the nation in percentage of drives hit in the fairway (.913), has shown considerable improvement this summer and in qualifying.

Redshirt sophomore Taylor Ramsey is a fifth returning lettermen for 2014-15. The native of Milledgeville, Ga played in five events last year as an individual in her first year. Freshmen Riley Lovorn and Marisa Messana are welcome additions to the Clemson program. “I am very excited about what I have seen from the freshmen in preseason qualifying,” said Horton. “They are going to push for starting positions and that is good to see. I have been impressed with their performance on the course and their overall demeanor. Both have work ethics that are off the charts.”

Lovorn is from nearby Anderson, S.C, and HannaHigh School where she was a four-time all-region and three-time all-state selection. She finished second at the Blade Junior and third at the Beth Daniel Junior Azalea tournament.

Messana, from Plantation, Fla., was ranked as the number-38 player in the class of 2014 by Golfweek. She had four wins in 2013 and finished sixth at the AJGA Taylor/ Made Adidas Junior Tournament.

As was the case last year, Horton has put together a strong national schedule. “We are going to go out of the Southeast a little more this year and play in some different areas on some different types of courses. We want to be as prepared as we can be for postseason competition.”

Clemson’s schedule includes fall trips to the Schooner Fall Classic in Norman, Okla, and to the Stanford Intercollegiate at the Stanford Golf Club in California. The spring season will begin in Puerto Rico at the Rio Mar Country Club, the same course the Clemson men have played on for many years to open their spring schedule. Overall, Clemson will play nine regular season tournaments in eight different states and Puerto Rico.