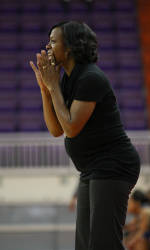 Game Notes (pdf) | Watch for FREE on TigerCast | Season Outlook Game Setup:Site: Littlejohn Coliseum (10,000)Date: Friday, November 11, 2011City: Clemson, SCTime: 5:30 PMRadio: WCCP-FM 104.9 (Don Munson – play-by-play, Kanetra Queen – color)Web: TigerCast at ClemsonTigers.com Tickets: 1-800-Clemson, or $6 at the door  Promotions: Fans with a men’s ticket get into the women’s game for freeCLEMSON, SC – The women’s basketball regular season gets underway on Friday as the Lady Tigers play host to the Davidson Wildcats in Littlejohn Coliseum at 5:30 pm. The game takes place as the first part of a doubleheader with the men’s team, who plays Gardner-Webb at 8:00 pm. The Tigers will have a quick turnaround, playing host to South Carolina State on Sunday at 2:00 pm in Littlejohn as well. Both games will be broadcast live on TigerCast at ClemsonTigers.com, with Friday night’s game offered as free premium content. Gametracker is also available at the official site of the Tigers, and general admission seats to the Lady Tigers are available for $6.00. Fans who have purchased tickets to the men’s game on Friday will receive free admission to the women’s game.Friday’s game opens Itoro Coleman’s second year as Clemson’s head coach. The two-time ACC Champion will lead the new-look Lady Tigers into the 2011-12 season with just four returning players and an exciting crop of five freshmen. Clemson and Davidson meet for the first time since 1977, as they have played just twice in school history, both Clemson victories. Clemson is 26-10 in season-openers all-time, and 31-5 in home openers. The freshman class was ranked 30th in the nation by ESPN Hoopgurlz, and those players will have every opportunity to make en early impact. The squad won an exhibition game last Friday against St. Augustine’s College in which freshmen played almost half of the total minutes in the game. Senior Shaniqua Pauldo is the leading returning scorer at 8.7 per game in 2010-11, and she also averaged 11.4 points per game as a sophomore in 2009-10. She and Lindsey Mason anchor the paint, as Mason averaged 6.0 points, 5.2 rebounds, and 1.5 blocks per contest as a junior last season. Chancie Dunn and Quinyotta Pettaway are the two sophomores on the squad. Dunn started in the exhibition contest, while Pettaway played solid minutes off the bench. Freshmen Nikki Dixon and Chelsea Lindsay saw a lot of action in the exhibition contest, with Dixon tallying 14 points, 9 assists, 8 rebounds, and 5 steals in a team-high 35 minutes. Lindsay had five assists and no turnovers in her 28 minutes as well. Natice Ford, Kelly Gramlich, and Deja Hawkins will also see the court early and often. Ford was ranked as the 47th-best prospect in the nation in the 2011 class, and is adept inside and outside the perimeter. Gramlich is known for her shooting ability and her propensity to stretch a defense, while Hawkins gives Clemson a big post option on both ends.