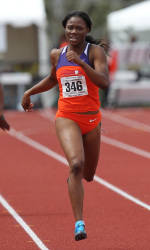 CLEMSON, SC – For the first time in program history, the Clemson women’s track & field team is rated No. 1 in the nation according to data released Tuesday by the U.S. Track & Field and Cross Country Coaches Association (USTFCCCA). The Tigers jumped two spots from last week’s rankings after winning their sixth consecutive ACC championship.

“We’re really excited to be ranked by the coaches association as the No. 1 team in the country,” said Lawrence Johnson, Clemson’s Director of Track & Field. “These rankings fluctuate every week, but at this moment in time to be first is exciting for this university, this athletic department and our women’s program. It’s another testament to how this program has grown in the last four years, and how our student-athletes have stepped up to meet the challenges in the ACC and beyond. It’s a landmark day in Clemson and for our program. Hopefully, we can continue at this pace.”

Clemson won nine of 21 events this past weekend at the ACC Outdoor Championships in Charlottesville, VA. The Tigers tallied 185 points, while runner-up Virginia had 100. The 85-point margin was the largest in the ACC for women’s track & field since the 1994 meet. Clemson’s nine championships were the second-most in program history behind the 11 won by the 2001 team.

Marlena Wesh is Clemson’s lone athlete ranked atop the national leaderboard in an event. The junior out of Virginia Beach, VA won the 400-meter dash with a meet-record time and national best 51.43 on Saturday. She also was a member of both championship relays and was the recipient of the ACC’s Most Valuable Track Performer award. Clemson’s 4×100 relay is fourth in the national standings, while the 4×400 relay is seventh.

Wesh was runner-up to Dezerea Bryant in the 200-meter dash, and the two rank sixth and seventh in the national performance standings. Bryant, the ACC champion in both short sprints, is also ranked among the nation’s top 10 in the 100 dash.

A pair of student-athletes rank second in the national performance standings currently, Alyssa Kulik in the steeplechase and Brianna Rollins in the 100 hurdles. Kulik won this past weekend with a meet, facility and school record time of 9:52.90, while Rollins owns a season-best 12.78 from earlier this season. Bridgette Owens, the ACC champion in the 100 hurdles, is third nationally in the event.

Also ranked among the national top 10 this week across various events are Keni Harrison in the 400 hurdles, and April Sinkler and Jasmine Brunson in the triple jump.

“The most important thing for us to get to this point was having student-athletes buy into the overall philosophy and vision of the program, and that’s to be the best in the ACC year in and year out,” Johnson said. “There are a bunch of teams with multiple national championships who are in position to be ranked No. 1 all the time. That’s the goal for us, to be one of those perennial teams considered to be formidable contenders for the championship every year. If they can do it at their respective universities, then why can’t we do it right here at Clemson University? It’s a fantastic time to be a Clemson Tiger!”