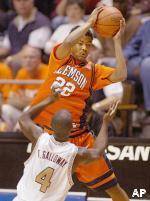 * Clemson guard Edward Scott scored 21 points in Clemson’s most recent game, a loss to South Carolina in Columbia. It was his fifth 20-point game of the season, and 12th of his career. He was a career best 8-8 from the foul line, the highest perfect free throw shooting game by a Clemson player since Adam Allenspach was 9-9 against Wofford n 12/16/ 00. Scott became the sixth Clemson player in history to start 100 games when he started against Duke on Feb. 9. He needs 10 rebounds to become the ninth player in ACC history to reach 1000 points, 500 assists and 400 rebounds in a career.

* Clemson has struggled at the outset of its last two games. Clemson trailed Duke in Durham 13-3 to open the game and trailed South Carolina 12-0 in the first five minutes of the contest last Wednesday night.

* While Clemson has won just one of its last three games the Tigers have improved in terms of perimeter defense during that time. Clemson opponents have made just 13 of their last 56, three-point shots, a 23.2 percentage.

* Clemson is playing South Carolina and North Carolina in consecutive games for the first time since the 1990-91 season.

* Clemson has two wins by two points or less this year in ACC play. This the first time Clemson has done that since the 1989-90 season.

* North Carolina won the first meeting between these two teams, 68-66 in Chapel Hill on January 14. It was the 49th straight homecourt win in the series for North Carolina. Clemson had a three-point attempt to tie the game with 21 seconds left, but the shot missed. Clemson’s frontcourt players were a combined 16-24 from the field and scored 38 points.