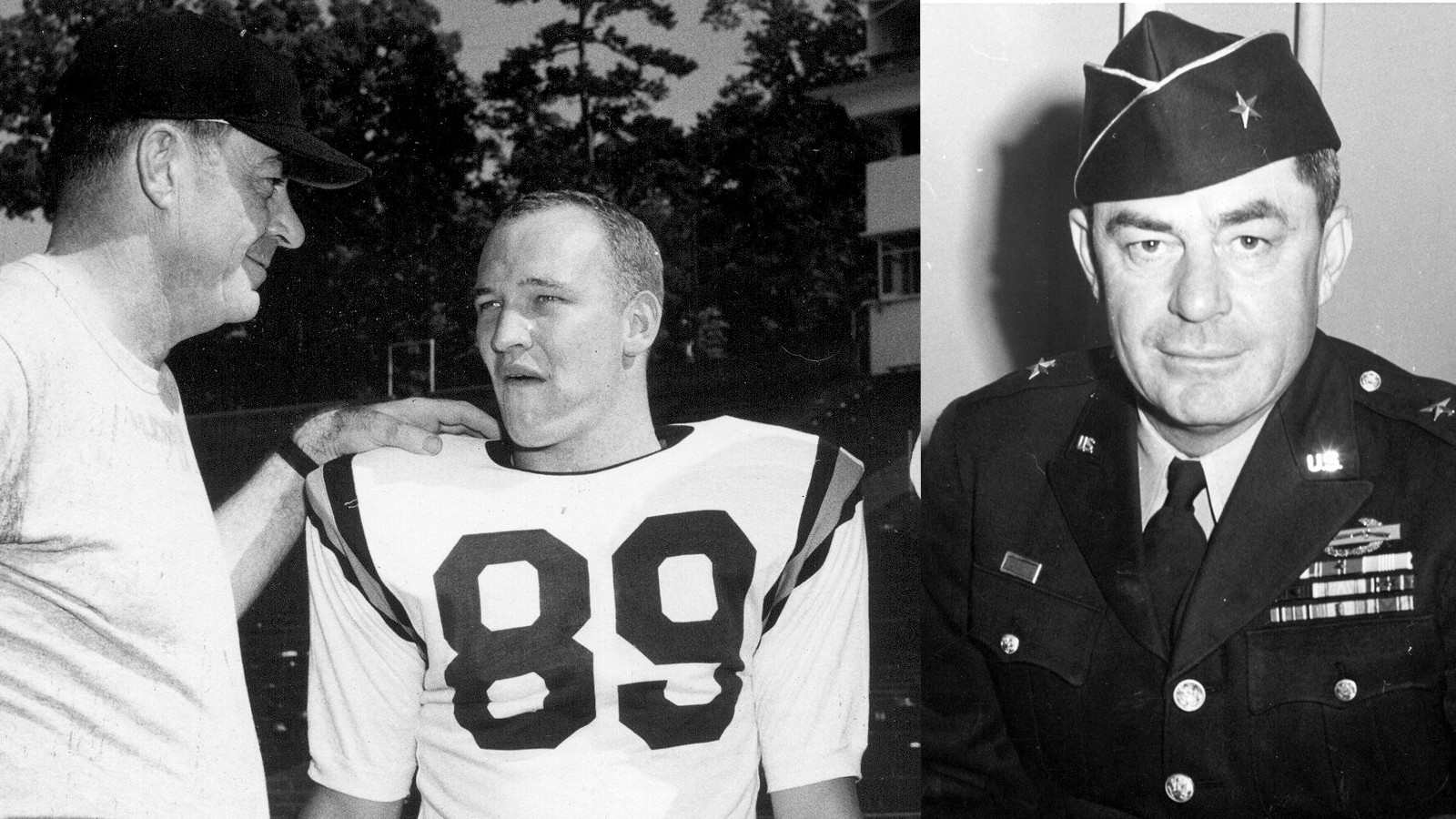 Bob Jones was a true leader. Not only did he serve as an assistant football coach, head golf coach and head boxing coach at Clemson, but he was also a high-ranking officer in the United States Army in active and reserve duty during his career.      Before he came to Clemson, he attended Starr High School in Starr, SC where he played basketball and baseball. The school didn’t field a football team, and he had only seen one football game in his life before he enrolled at Clemson, a 1923 contest between the Tigers and Centre College when he visited his brother who was a student at Clemson.   Jones came to Clemson as a student on August 31, 1926. “My father didn’t even cut the motor off in the car,” Jones said in a 1973 interview. “He said he had to get back to the farm and wished me good luck.” It wasn’t long until Jones wrote his father that he didn’t believe too much in this education.  His father replied: “Son, stop your bellyaching. If you want to come home, come on, the mule is still waiting down here.”    Luckily for Clemson, that ended Jones’ idea of quitting school and going back to the farm or pursuing other professions. By the time he graduated from Clemson he was so interested in athletics he would spend a lifetime in the coaching profession, all at one school, Clemson.   Jones graduated with a bachelor of science degree in animal husbandry and never left Clemson (except for active military service during World War II) until his retirement in the summer of 1974.  At Clemson, he played both basketball and football. He was a three-year starter for the Tiger football team, playing on both sides of the ball at the end position.  He was captain of the basketball team his senior year when Fike Field House was dedicated and was named an All-South football player while playing end.    Before he graduated from Clemson, Head Football and Basketball Coach Josh Cody gave him the duty of coaching the freshman basketball team. Cody must have sensed that he had excellent leadership qualities. The opportunity must have heightened his interest in the coaching profession, as he was a career coach at Tigertown. “I drew my first paycheck from Clemson in December 1930,” said Jones. “It was for $75, plus room and board.” He was retained by the new Clemson Football Coach Jess Neely as an assistant football coach on January 1, 1931, and was under coach Neely until 1939. When Frank Howard was named the head football coach in 1940, he stayed as an end coach until Howard retired after the 1969 season.  His list of great ends that played for him include Glenn Smith, Oscar Thompson, Ronnie Ducworth, Dreher Gaskin, Ray Masneri, Bob Hudson, Joe Blalock, Scott Jackson, and Whitey Jordan among others.   Besides his football coaching duties, he was the boxing coach from 1934 to 1941 and in 1947-1948.  He was also the head golf coach in 1931-1939, 1947-1949, and 1970-1974.  In boxing, he coached Clemson to Southern Conference Championships in 1938 and 1940 and coached Tiger stars like Warren Wilson, John “Ripper” Murray, Russell Dorn, Harvey Ferguson, Jerry Orr, and Carl Pulkinen just to name a few.  In golf, he was the coach during Clemson’s 19-match winning streak over teams in dual matches that lasted for three seasons in the late 1940s. He also coached the Tigers to two state championships.   Jones received his commission as a reserve second lieutenant upon completion of his ROTC training at Clemson. Rising to the rank of captain in 1938, he was called to active duty in May, 1941, and was promoted to major in June, 1942.   In World War II, he was a special services officer, executive officer and infantry battalion commander. He was promoted to the rank of lieutenant colonel in October 1943.   Jones was wounded in action while commanding an infantry battalion in the European Theatre of Operations from December 1943 to July 1944. He was again wounded in 1944 while commanding an infantry unit.   He returned to the United States in July 1945 and became assistant professor of military science and tactics at Clemson and reverted to reserve status in January 1946.   Jones was promoted to colonel in May 1946 and was promoted to brigadier general in December 1954. In December 1960 he received his promotion to major general.   He received the Silver Star for gallantry in action during World War II in the European Theater of Operations and was also awarded the Bronze Star with cluster for heroic action in the European Theatre. Other awards include the Purple Heart with cluster, the Combat Infantryman Badge, Commendation Medal with pendant and four major campaign ribbons.  In 1965, Jones was commanding general of the 108th Division, with the rank of major general after 35 years of reserve and active duty. He was awarded the Legion of Merit medal at his retirement.  In addition to being active in athletics and the military, Jones, his father and his brother at one time operated the largest peach orchard in Anderson County. He retired from football when Frank Howard retired in 1969. He was named the head golf coach and assistant to the athletic director and served in these capacities until his retirement from Clemson in 1974. All told he had logged 45 years at Clemson.

”If I had to do it all over again, I’d follow the same route,” Jones once said. “I love Clemson and I was there all of those years.”

He had quite a career of leading and guiding young men on the right paths. The United States Army, Clemson, and the young people he taught, coached and led will be forever grateful.