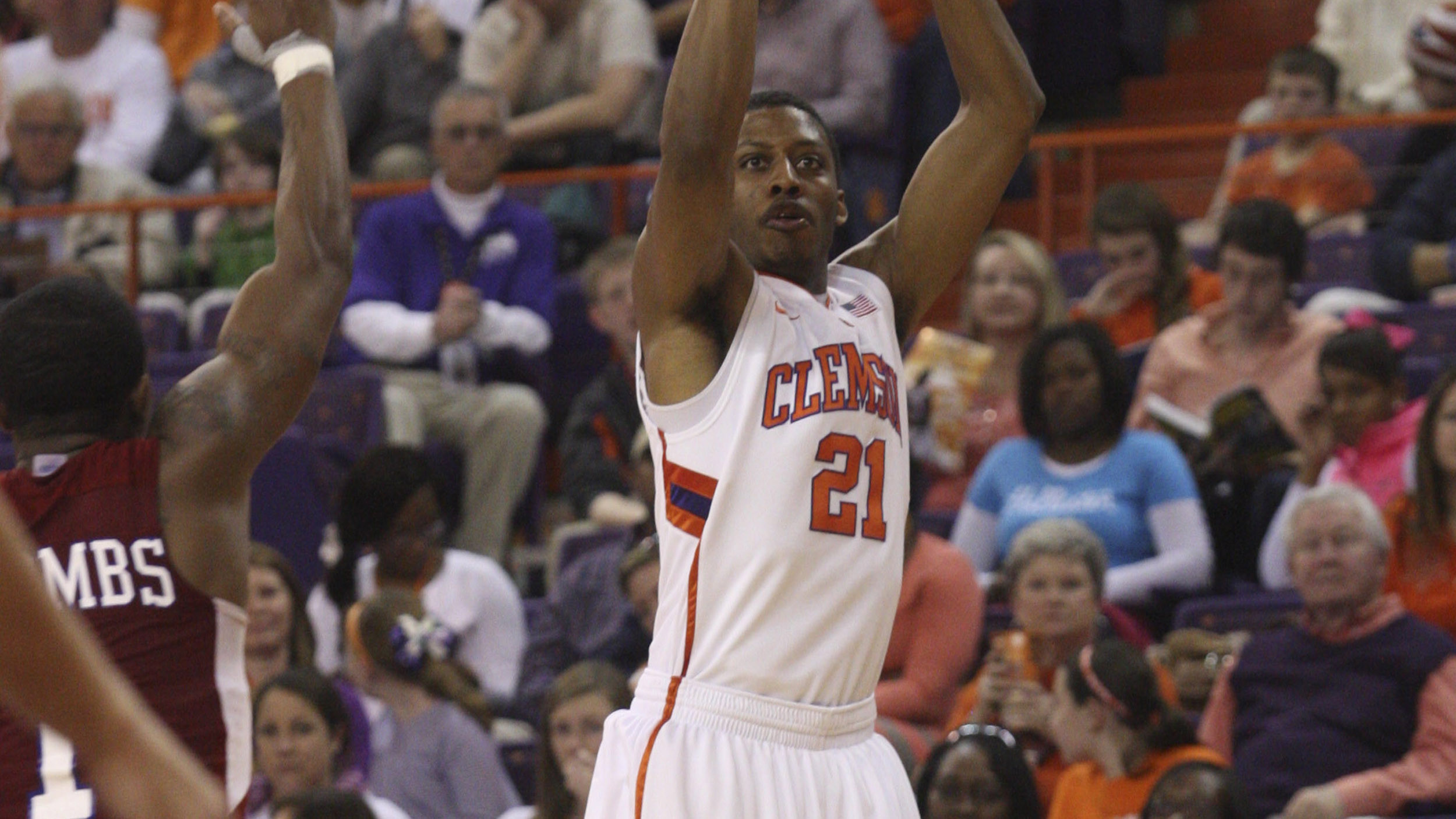 CLEMSON, SC – Clemson went on a 21-2 run to end the first half and held SC State to 41 total points in a 77-41 rout on Sunday at Littlejohn Coliseum.  The win improved the Tigers to 7-4 on the season and dropped the Bulldogs to 4-9.

Damarcus Harrison had a career-high 15 points for Clemson.  The sophomore transfer’s previous high was 12 against Iona in last year’s NCAA Tournament for BYU.  He made 6-of-11 field goals, including 3-of-7 from long distance, and also added a career-best six assists. He was one of four Tigers in double figures, as Milton Jennings added 15, Devin Booker had 11 and K.J. McDaniels posted 10.

Clemson had 22 assists on 30 baskets, the highest number of assists in 76 games under Head Coach Brad Brownell.  The Tigers shot 49.2 percent for the game and 51.6 percent after halftime.  All 11 players on Clemson’s roster that played scored in Sunday’s game.

Clemson struggled to shoot the ball from the outset, connecting on just two of its first nine shots before Damarcus Harrison buried an 18-footer to make it 11-10 in favor of SC State.  The lid lifted at that point for the Tigers, who then made four of their next six field goals.

Harrison’s high-arching three from the left wing made it 18-16 with just over eight minutes left, and began a season-best 17-0 run for the Tigers that included an alley-oop to K.J. McDaniels and a pair of baskets by Filer, the last of which was a three-point play on the break.  His play gave Clemson a 30-16 lead with four minutes to go in the half.  The lead grew to 18 with under two to play as McDaniels took off on another alley-oop, this time from a Rod Hall mid-court pass.

The first half run ended with a 21-2 run for Clemson, with SC State’s only basket in the final nine minutes a dunk in transition by Matthew Hezekiah with 3:29 remaining.  SC State’s 18 points in the first half were a season-low by a Tiger opponent so far this season.

Jennings came alive from three in the second half, as his second trifecta from the right corner gave Clemson a 49-22 lead.  Senior counterpart Devin Booker had a dunk inside moments later to give the Tigers another 27-point advantage at the first media timeout.  Harrison buried his second three of the game and then found Jennings in transition for a dunk on the next possession to push the lead to 30 at 59-29.

The lead ballooned to 34 behind a pair of baskets for freshman Josh Smith, the last of which was a dunk in transition.  Clemson’s largest lead was 39 on a jumper by Bernard Sullivan in the final two minutes.

The Tigers will break for several days before returning to practice on Dec. 28.  Clemson’s next game will be at home on Tuesday, Jan. 1 at 4:00 PM against The Citadel.