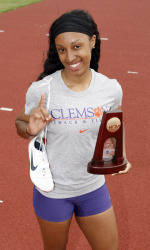 CLEMSON, SC – Clemson track & field will travel nine student-athletes to Idaho Center Arena in Boise, ID for the NCAA Indoor Championships this weekend. The Tiger women look to improve upon a No. 11 NCAA finish from last indoor season, and carry a No. 4 national rating into this week’s competition. Eight of the nine traveling to Boise are from the women’s program. Spencer Adams will represent the men’s team in Idaho.

The meet will be carried live on ESPN3. Friday’s coverage begins at 7:30 PM, while Saturday’s action starts at 8:00.

The action gets underway Friday at 5:30 PM locally with the prelims for the men’s 60-meter hurdles. Adams is third seed nationally in the event with a season-best 7.66 at the Tyson Invitational last month. The women’s 60 hurdle prelims follow at 5:45 and will feature three student-athletes from Clemson, an all-time high number of qualifiers in the event for the Tigers. Defending NCAA champion Brianna Rollins leads the group, while Keni Harrison and Bridgette Owens will join her in the qualifying rounds. The finals for both hurdles are Saturday at 6:35 and 6:45 PM, respectively.

Marlena Wesh leads the NCAA in the women’s 400-meter dash with a seed time of 52.21, a Clemson record. She runs the prelims at 6:15 Friday, with the final scheduled for 7:05 on Saturday.

Three females qualified in the 60 dash as well for the Tigers, a first in school history. The ACC’s Most Valuable Performer, Dezerea Bryant, leads the group into action as a freshman. She will be joined by junior classmates Jasmine Edgerson and Stormy Kendrick, both of whom are veterans of the NCAA Track & Field Championships. The 60 prelims are Friday at 6:45, with the final set for Saturday at 7:25.

Bryant and Kendrick will also compete in the 200-meter dash Friday. Both the prelims (7:45) and final (9:00) are scheduled for the first day of competition.

Clemson’s lone field event competitor this weekend will be junior Jasmine Brunson in the triple jump. The native of Bermuda is seeded third for the event in her first NCAA indoor national appearance. She hit a jump of 43’3.75″ and won the ACC crown two weeks ago in Boston. Brunson is scheduled to compete Saturday at 6:30.