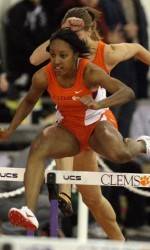 Gisele Oliveira. Mamona had a jump of 43’8.5″ to hold off teammate April Sinkler, who was just one centimeter shy of an automatic qualifying mark herself.

Brianna Rollins once again etched her name in the Clemson record books. The freshman sensation from Miami, FL set the school record in the 300m dash with a time of 37.90. She won the event and led a sweep of the top three finishing spots by Clemson. Kristine Scott was runner-up with a time of 38.49, the No. 5 time in Clemson history for the 300m dash. Michaylin Golladay was third (38.64).

Scott also established a personal best in the 60m dash, turning in a time of 7.48. She moved up one spot in the record books, and now owns the seventh-best 60m time in Clemson history. Jasmine Edgerson was ninth after running 7.68 in the prelims.

Rollins was runner-up in the 60m hurdles with an NCAA provisional time, the second straight week she has achieved that status. She ran an 8.31 in the final, beating Golladay (8.46) who came across the line in third.

Brittany Pringley, high school teammate of Rollins, was runner-up in the 500m run with a time of 1:12.99. Her time was just three one-hundredths of a second off the Clemson record.

In the mile run, Kim Ruck became the first female at Clemson to go under five minutes since the 2001 indoor season. Ruck had a time of 4:55.18, ninth-best in Clemson history, to finish fourth in the event Friday.

Not to be outdone, there were plenty of high marks for the men’s team as well. Spencer Adams, a two-sport athlete making his debut in a Tiger track uniform, won the 60m hurdles with an NCAA provisional time of 7.86. In fact, his time ranks eighth-best in school history. Charlton Rolle, a junior transfer from Tennessee, placed fifth for the Tigers (8.03).

Jordan Rispress was third after crossing the finish line with a time of 1:04.05. Chris Slate won the men’s mile run after posting a time of 4:20.75.

In the field events, newcomer Xavier Tromp was the star on Friday for Lawrence Johnson’s team. Tromp, an exchange student from France, cleared the bar at 17’7″ in the pole vault to finish runner-up to former ACC champion Brian Mondschein, who competed unattached. Tromp’s NCAA qualifying clearance vaulted him to No. 2 in the Clemson record books, behind only former ACC champion Mitch Greeley, who cleared 18’1″ in 2008.

Alex Padgett won the 35-pound weight throw by matching his personal best. The red-shirt junior continued his consistent start to the 2010 season with an effort of 62’5″. Zach Berg, a recent graduate for the Tiger program, was runner-up with a personal best 61’10.5″ throw. His mark ranks fourth-best in Clemson history for the event.

Clemson will try and continue its momentum on Saturday, as the teams wrap up action at the Hokies’ Rector Field House.