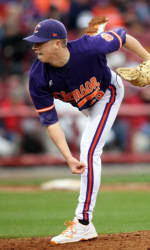 Clemson made Jack Leggett’s 1,900th career game as a head coach a memorable one, as the Tigers pounded out 17 hits en route to a 13-7 victory over Georgia Tech in front of 1,947 fans at Russ Chandler Stadium on Saturday afternoon. The Tigers, who evened the series 1-1, improved to 25-19 overall and 13-10 in the ACC. The Yellow Jackets dropped to 26-18 overall and 10-13 in ACC play.

The win was Leggett’s 1,214th in his 33rd year as a head coach. He moved into a tie for 14th place with Richard Jones, who ended his career as head coach at Illinois.

Mike Kent (1-1) entered the game with no outs in the fifth inning and pitched the rest of the game. He allowed just four hits, one run, and no walks with one strikeout in 5.0 innings pitched to earn the win.

Georgia Tech starter Dusty Isaacs (5-3) suffered the loss, as he gave up six hits, six runs, and one walk with two strikeouts in 3.0 innings pitched.

Kyle Wren chopped the first pitch of the game for the Yellow Jackets in the first inning in front of the plate. The ball went over the first-base bag and just beyond the reach of first-baseman Jon McGibbon. Brad Felder could not field the ball along the fence in foul territory down the right-field line and Wren scored on an inside-the-park homer, his second home run of the season.

Phil Pohl blasted the first pitch of the top of the second inning over the fence down the left-field line for a homer, his seventh long ball of the season.

In the bottom of the second inning, Daniel Palka gave the Yellow Jackets the lead again when he crushed a leadoff home run to right field on an 0-2 pitch, his 11th long ball of the season.

Brad Felder led off the third inning with a double off the wall in right-center and scored when Jason Stolz lined a 1-2 pitch to right-center for a single.

In the fourth inning, leadoff batter Phil Pohl was hit by a 1-2 pitch, then Jay Baum singled up the middle on an 0-2 pitch to advance Pohl to third base. After Jon McGibbon walked on five pitches to load the bases, Kieboom belted a grand slam to left field, his second long ball of the season. It was also Kieboom’s third career home run and first career grand slam along with Clemson’s first grand slam of 2012.

Clemson added four runs to its lead in the top of the fifth inning. Pohl led off with a single to left field. Two batters later, McGibbon lined a one-out single to right field, then Kieboom laced a double down the left-field line to score Pohl. After Felder was intentionally walked, Stolz singled to right field to plate Pohl. Steve Wilkerson reached on a fielder’s choice as Stolz was retired at second and Kieboom scored. Thomas Brittle followed with a two-out single through the left side to score Felder and extend his hitting streak to 17 games. Clemson had been 0-for-16 with two outs in the series before Brittle’s two-out single.

Georgia Tech cut Clemson’s eight-run lead in half in the bottom of the fifth inning. Mott Hyde led off with a six-pitch walk, then Wren grounded a 1-2 pitch up the middle for a single. Sam Dove followed with a single up the middle to plate Hyde, then Thomas hit a three-run homer to right field, his third home run of the season.

In the sixth inning, Thomas Smith led off with a single up the middle, then Paul Kronenfeld lined a single to right-center to advance Smith to third. Hyde lofted a sacrifice fly to center to score Smith and cut Clemson’s lead to 10-7, then Wren followed with an infield single. Dove followed with a blooper to shallow left field, but Baum made a sliding catch and doubled off Kronenfeld at second to end the inning.

Felder led off the seventh inning with a single through the right side and stole second. After Stolz walked, Wilkerson moved both runners up a base on a sacrifice bunt. Brittle struck out for out #2, then Shaffer was intentionally walked. Pohl came through with a single to center on a 1-2 pitch to score Felder and Stolz, giving the Tigers a 12-7 lead.

In the ninth inning, Wilkerson laced a one-out double to right field and scored on Brittle’s triple down the right-field line.

Clemson and Georgia Tech will play game-three of the three-game series on Sunday at 1:00 PM. The game will be available live via webcast at ESPN3.