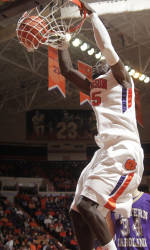 Demontez Stitt added 12 points while Andre Young and Milton Jennings had 11 apiece for the Tigers (2-0), who led by double-digits most of the game but struggled to put away the Terriers, the defending Southern Conference regular-season and tournament champions.

Noah Dahlman paced the Terriers (0-2) with 17 points and Brad Loesing added 14, including 12 in the first half.

Clemson led by as many as 16 points in the first half, but Loesing finished the half with five straight points to cut the margin to 40-30 at intermission.

Clemson, which never trailed, took a 51-36 advantage early in the second half, but Wofford rallied to cut the deficit to seven (67-60) with two minutes left. Freshman Cory Stanton ended the threat for the Tigers with a pair of free throws.