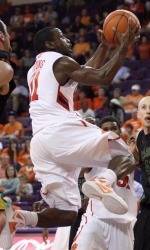 Clemson Topples Iowa on the Road in Big Ten/ACC Challenge, 71-55

IOWA CITY, IA – Clemson used a 21-6 first-half run en route to a convincing 71-55 victory on the road over Iowa on Tuesday in the Big Ten/ACC Challenge. The Tigers moved to 4-2 with the win, while the Hawkeyes fell to 4-3. It was Clemson’s fourth straight road win in Big Ten/ACC Challenge play and ninth overall in the event in 13 tries. Iowa fell to 2-9 overall in challenge games.

“It was a great team win tonight,” said Brad Brownell, Clemson’s second-year head coach. “We had a lot of guys play well for us tonight. I thought our two seniors, Andre (Young) and Tanner (Smith), were outstanding and they showed that they weren’t going to be intimidated with a road environment. Then, off the bench, we had a number of guys play well.”

Young led the Tigers with 19 points and hit 5-of-6 from three-point range. He added four assists and two steals. T.J. Sapp scored 13 off the bench and hit 3-of-6 from deep for his season-high point total. Tanner Smith had an outstanding all-around game with seven points, eight assists and 14 rebounds to match a career-best.

The Hawkeyes got out to a quick 6-2 lead before Clemson settled in to the game. The Tigers used a 21-6 run to gain its first double-digit advantage of the game at 23-12 on Young’s second three-point basket in a two-minute stretch. T.J. Sapp came off the bench to spark the run, scoring five points on a long three and a fastbreak run-out.

Bryan Narcisse then connected on his first long-range shot of the season to push the lead to 34-20.

The Tigers hit 7-of-14 three-point shots in the opening half and made 48.1 percent overall from the field. Meanwhile, Iowa, who came in averaging over 80 points per game, shot just 7-for-30 in the half, which equates to 23.3 percent.

The three-pointers continued to drop in the opening moments of the second half, as Young took a hit-ahead length-of-the-court pass from Smith and drilled an open shot. He hit another a minute later, and then a putback by reserve center Catalin Baciu made it 42-24 in favor of Clemson. On the other end, Iowa was stripped by Young, who returned the favor to Smith with a long pass ahead to Smith who gently dunked the ball to give Clemson its first 20-point lead.

Sapp extended the lead back to 22 after Iowa had cut to within 20 for the first time in several minutes with 10:48 remaining in the game. He hit his third trifecta after Narcisse hit him with a perfect pass to break Iowa’s fullcourt press. Rod Hall broke the pressure equally as well a few minutes later when he took a missed shot the length of the court for a tough lay-in to make it 56-34 with 8:27 left. Iowa cut the deficit under 20 for good again at 3:08 on free throws by leading scorer Matt Gatens, who finished with just eight points.

Clemson was able to play all 12 players on its roster on Tuesday. Nine of them scored at least a point for the Tigers, including Baciu, who was 4-for-5 and posted eight second-half points.

The Tigers return to action Sunday, Dec. 4 to take on in-state rival South Carolina. The game will tip off at 3:30 PM and will be televised by ESPNU.