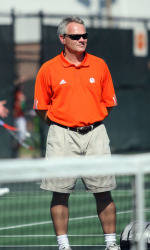 CLEMSON, SC – The Clemson men’s tennis team will open its 2009 season Saturday as the Tigers play host to The Citadel at 11:00 a.m. at the Hoke Sloan Tennis Center’s Indoor facility.

The match with South Alabama originally scheduled for Saturday as part of a double header has been cancelled and will not be rescheduled this season.

Also the 2009 season will mark the first year for Clemson Head Coach Chuck McCuen. McCuen has been an assistant at Clemson for the past six years. He is only the seventh head Coach in the history of the program.

The Tigers return all six starters from last season’s team that finished 15-20. Clemson also returns seven letter winners while losing only one.

This will be the 47th meeting between Clemson and The Citadel on the tennis courts. The series began on April 15, 1930 as the two teams played to a 3-3 tie. Clemson leads the overall series 31-14-1. The Tigers have won 18 matches in a row against the Bulldogs dating back to the 1962 season. Prior to this streak the Citadel won 10 of 15 matches from the Tigers under long-time Bulldog Head Coach Don Bunch.

This will be the season opening match for The Citadel. The Bulldogs return four starters for the 2009 campaign. The Citadel finished the 2008 season with a 15-10 record overall and a 5-3 mark in Southern Conference play for a third place finish.

“I am so honored and excited about this first match as Head Coach at Clemson,” said Head Coach Chuck McCuen. “With my 19 years of experience at Georgia State University as head coach and mentoring from Coach Kriese (Clemson ) and Peter Scott (Flagler College), I feel the team and I are ready to compete at the high standards expected by Clemson Athletics.

“This year’s team and coaching staff is truly one of the most dedicated and hard working group of student-athletes and individuals I have ever had the privilege to worked with during my career,” continued McCuen. “They have been open to new philosophies and have taken ownership and responsibility of their games. I have never been a coach who sets limits on one’s abilities and with that said–this team has placed themselves in a position to have a successful year.”