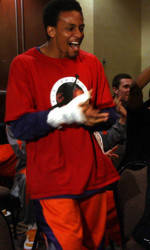 Clemson, SC – Clemson will face Villanova in the first round of the NCAA men’s basketball tournament on Friday, March 21 in Tampa, FL at the St. Pete Times Forum. The time of the game will be announced by the NCAA on Monday. The winner of the Clemson vs. Villanova game will then face the winner of the Vanderbilt vs. Siena game on Sunday.

Clemson is seeded fifth in the Midwest Region, the best seed for the Tigers since 1997 when Clemson was a number-four seed. Clemson advanced to the Sweet 16 that year. Villanova is seeded 12th in the region.

“This is bit of bittersweet day,” said Clemson Head Coach Oliver Purnell. “We were terribly disappointed by not winning the ACC Championship game against North Carolina. But, we’re playing at a high level. We set our goal prior to the season to win a national championship, and now we have an opportunity to start that quest this Friday. The first step was being selected on Sunday.

“I was pleased with the number-five seed. We feel like we’ve got a really good basketball team and deserved a high seed, based on our body of work for the entire year. But also with the way we’ve played down the stretch.

“We are excited to go to Tampa. We played there at the ACC Tournament last year, so we have played in that arena. I always think it is better to stay in your region of the nation and not make a long trip to the West.”

This is the third different program Purnell has taken to the NCAA tournament. He also guided Old Dominion to the event in 1992 and Dayton to the 2000 and 2003 NCAA Tournaments.

Clemson enters the NCAA Tournament with a 24-9 record, including a 10-6 mark in ACC regular season games. Clemson has won nine of its last 13 games, including its first run to the ACC tournament championship game since 1962. Clemson defeated Boston College and Duke at the ACC Tournament before losing to North Carolina in the championship game on Sunday, 86-81. A victory in the NCAA Tournament will give Clemson 25 wins, which would tie the school record.

The Tigers, who are ranked 19th at the RPI, have five players averaging in double figures, led by second-team All-ACC guard K.C. Rivers, who scores 14.7 points per game. Cliff Hammonds, a third-team All-ACC selection on the court and the winner of the ACC’s Skip Prosser Award as the outstanding student-athlete in the league, is second in scoring with 11.5 per game. He also leads the team in assists with 131 and in steals with 64.

Trevor Booker and James Mays give Clemson a solid frontcourt combination. Booker averages 11.2 points per game and a team best 7.4 rebounds. He also leads the Tigers in blocked shots with 62. Mays is at 10.9 points and 6.9 rebounds per game. Sam Perry is the fifth starter. The senior who is a top defensive player and team leader, averages 3.1 points and 2.3 rebounds per game. Clemson is 9-4 since he moved into the starting lineup on February 2.

This will be just the fourth meeting between Clemson and Villanova and the Wildcats hold a 3-0 lead. This will be the first meeting since the 1989-90 season when Villanova defeated a Clemson team that would go on to win the ACC regular season championship, 73-71 at a Christmas tournament in San Diego, CA. Villanova also defeated Clemson twice in Philadelphia in 1959-60 and 1972-73.

Villanova enters the NCAA tournament with a 20-12 record, including a 9-9 record in the Big East and an 8-9 record away from home. Villanova began the season with a 10-1 record and reached a number-16 ranking in the USA Today poll entering the turn of the calendar into 2008.

Scottie Reynolds is the Wildcats leading scorer with a 15.6 average. He is shooting 78.3 percent from the foul line and 36 percent on three-point shots. Dante Cunningham is the only other double figure scorer with 10.4 points per game. He is also the top rebounder with a 6.5 average and paces the team in field goal percentage at .544.

Jay Wright is the head coach of the Wildcats. This will be his sixth appearance in the NCAA Tournament. He has a 5-5 record at Villanova and Hofstra. He took Villanova to an Elite Eight finish in 2006 before losing to National Champion Florida.

Clemson and Villanova had two common opponents this year. NC State defeated Villanova on a neutral site in Orlando over Thanksgiving, 69-68. Clemson swept the Wolfpack this year, winning 70-54 at Clemson and 71-64 in Raleigh. Villanova was 1-1 against DePaul this season, losing 84-76 in Chicago and winning 76-69 in Philadelphia. The Tigers defeated DePaul 90-74 in the San Juan Shootout in Puerto Rico in December.