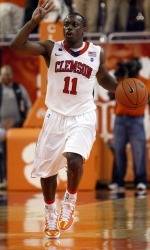 Clemson to Face College of Charleston on the Road Wednesday

QUICK FACTS  Clemson and College of Charleston meet for the second straight year after an 80-year hiatus between the two schools. The Tigers won last year’s meeting by a score of 94-55, thanks to 60 percent shooting from the field.  The Tigers enter the game having won their last two, both at home. Clemson held Savannah State to 23 percent shooting on Dec. 17, and held UNC Greensboro to 21 percent shooting in the first half of the Dec. 19 victory.  Clemson has won 12 of its last 13 non-conference road games.  The Cougars have played two ACC opponents close this season. Charleston fell by one, 75-74, at Maryland in their season opener on Nov. 10 and lost 74-69 at North Carolina on Nov. 28.  Brad Brownell faced the College of Charleston four times during his tenure at UNC Wilmington, winning 78-69 in 2002, his first year as the Seahawks’ head coach. He has never faced Bobby Cremins, who has been with the school since the 2006-07 season.  Clemson is second in the ACC and 44th in the NCAA in scoring defense, allowing just 61 points per game. CofC guard Andrew Goudelock is eighth nationally in scoring average.  Demontez Stitt is one of 66 players nationally to be nominated for the 2011 Bob Cousy Award. The list will be down to 20 candidates by Jan. 3. Stitt started at point guard his first three seasons, before moving primarily off the ball for the 2010-11 season.  Jerai Grant was named ACC Player-of-the-Week on Monday, the first such honor of his career. In two games off the bench this past week, Grant averaged 17.0 points, 9.5 rebounds and 4.5 blocked shots per game for the Tigers.  Grant is second in Clemson history with a 60.6 career field goal percentage. Harold Jamison holds the school record with a 60.9 percent clip from 1995-99.  Grant now ranks fifth among ACC players with 2.1 blocked shots per game. He had four in the win over Savannah State, followed by a career-high tying five against UNC Greensboro.  Andre Young is coming off a career-high 22-point performance against UNC Greensboro. He hit 4-of-8 three-point shots and has made 45 percent on the season, fourth-best in the ACC.