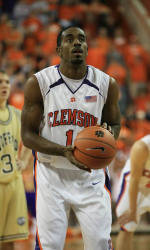 Clemson to Face Charlotte on the Road Saturday Night

Quick Facts  Saturday’s game between Clemson and Charlotte will be the sixth meeting in the series. The Tigers hold a 3-2 advantage in the series, which includes Clemson’s 104-79 win at the Charlotte Coliseum in 1989-90.

 Last season, Charlotte upset a #18 ranked Clemson team in Littlejohn by a score of 82-72. Trevor Booker was a bright spot for the Tigers, however, scoring a career-high 32 points in the loss.

 Charlotte Head Coach Bobby Lutz has ties to Clemson, as he served as an assistant under Cliff Ellis in the 1984-85 and 1985-86 seasons. The Tigers advanced to the NIT in both of Lutz’ years with the program.

 Last time out, Clemson defeated Wofford in its home opener by a score of 93-40. The 53-point win was the largest margin of victory for the Tiger program since the 1990 team defeated Georgia State 117-59 at Littlejohn Coliseum.

 Head Coach Oliver Purnell needs two wins to reach 100 with the Tiger basketball program. He has 354 in his career, including 98 with Clemson since the 2003-04 season.

 Clemson has been strong in the month of November, having won its last 23 games under Purnell’s watch. The Tiger program owns an alltime record of 91-15 in November as well.

 Clemson has won six straight non-conference games at road venues over the past two seasons. Last year, the Tigers downed Mississippi State, East Carolina, and Alabama on the road.

 Trevor Booker was named ACC Co-Player-ofthe- Week on Monday after averaging 13.0 points and 13.7 rebounds per game last weekend at the Charleston Classic. Booker was named MVP of the season-opening tournament.

 Saturday’s game will be a homecoming for two members of Clemson’s starting lineup, Demontez Stitt and K.C. Rivers. Stitt, from Matthews, NC, had 13 points in last year’s game against Charlotte. Rivers’ uncle, Byron Dinkins, was a star guard for Charlotte from 1985-89 and had his jersey retired by the school.

 Defense has been an area of strength thus far in the season for Clemson, as the Tigers have limited opponents to 36 percent shooting and have forced an average of 20 turnovers per game. Clemson has averaged 9.5 steals and 7.0 blocks per game so far this season.

 Rivers is third in school history in three-point shooting, with 219 in his career. He trails only Terrell McIntyre and Cliff Hammonds on the alltime list. He recently passed current NBA guard Will Solomon, who had 214 from 1998-2001.