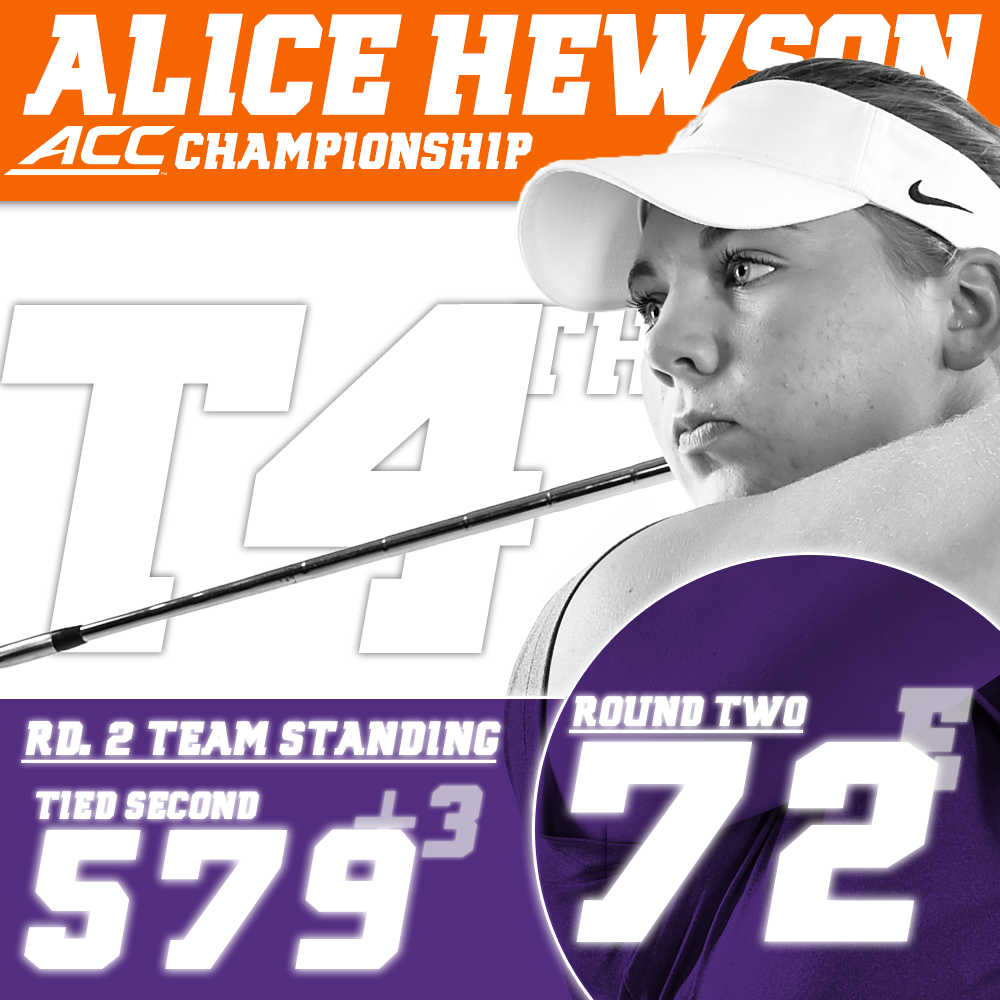 Pawleys Island, S.C.—Alice Hewson and Ana Paula Valdes both shot even par rounds of 72 to lead Clemson to a tie for second place in the team standings after two rounds of the ACC Women’s Golf Tournament at The Reserve at Pawleys Island. The final round will be held Saturday morning. Clemson will start off the first tee at 9:20 a.m. and will be paired with Duke and North Carolina.

Duke has a nine-shot lead in the team race with a 570 score after 36 holes. Clemson, fourth-ranked Florida State and North Carolina are all tied for second at 579.   NC State and Miami (FL) are tied for fifth at 586.

Clemson had a team score of 292 on Friday, tied for the second best score for the Clemson women’s golf program in the ACC Tournament. The only round better was Thursday’s 287 score.

Hewson’s round of 72 included 16 pars, one birdie and on bogey.   The sophomore has a 142 total after two days, tied for fourth in the field of 60 golfers. Combined with her opening round 70, Hewson’s 142 total is the best ever for a Clemson women’s golfer after 36 holes of the women’s ACC Tournament.   Her only birdie took place on the par four 16th when she drove the 288-yard hole and two putted. She also made a 10-foot par save on the 18th hole.

Valdes had her second straight even par 72 on Friday and is in a tie for seventh place after 36 holes. The freshman from Mexico is the first Clemson women’s golfer to score par or better in her first two rounds of the ACC Tournament.   Unlike Hewson, Valdes had a wild round on Friday with six birdies and six bogeys. Valdes and Hewson have eight birdies through 36 holes, tied for second best in the tournament.

Sydney Legacy, Marisa Messana and Kennedy Swann all had second round scores of 74.   Legacy was four over par through eighth holes, but then made three birdies in her next five holes. That included a birdie on the par four 11th hole when she hit her approach shot to within one foot of the pin. Legacy stands at 145 after two rounds, good enough for 15th place.

Messana got off to a good start and made the turn at one-under-par 35.   She made a birdie on the sixth hole when she hit the pin from 100 yards out, then made a 20-foot putt for the birdie  She made a double bogey on the 11th hole when she drove the ball into the woods on the right, but she battled back to par the last six holes and shoot her second straight 74.

Swann was the most improved Clemson golfer on Friday with a two over par 74.   After score an 80 in the first round, the freshman from Austin, Texas had just three bogeys and a birdie in scoring her 74.

Clemson is in great shape to have its best finish at the ACC Women’s Golf Tournament.   Clemson has improved from ninth to eighth to sixth in its three previous years.

“I thought the course played a little tougher today,” said Clemson Head Coach Kelley Hester. “I was proud of our team for the way they hung in there. There were some points where it could have gotten away for us, but all of them hung in there.   I was proud of all of them, but especially Kennedy who made a six-shot improvement.

“Overall I am pleased with how we have played the first two days. We are in contention.”