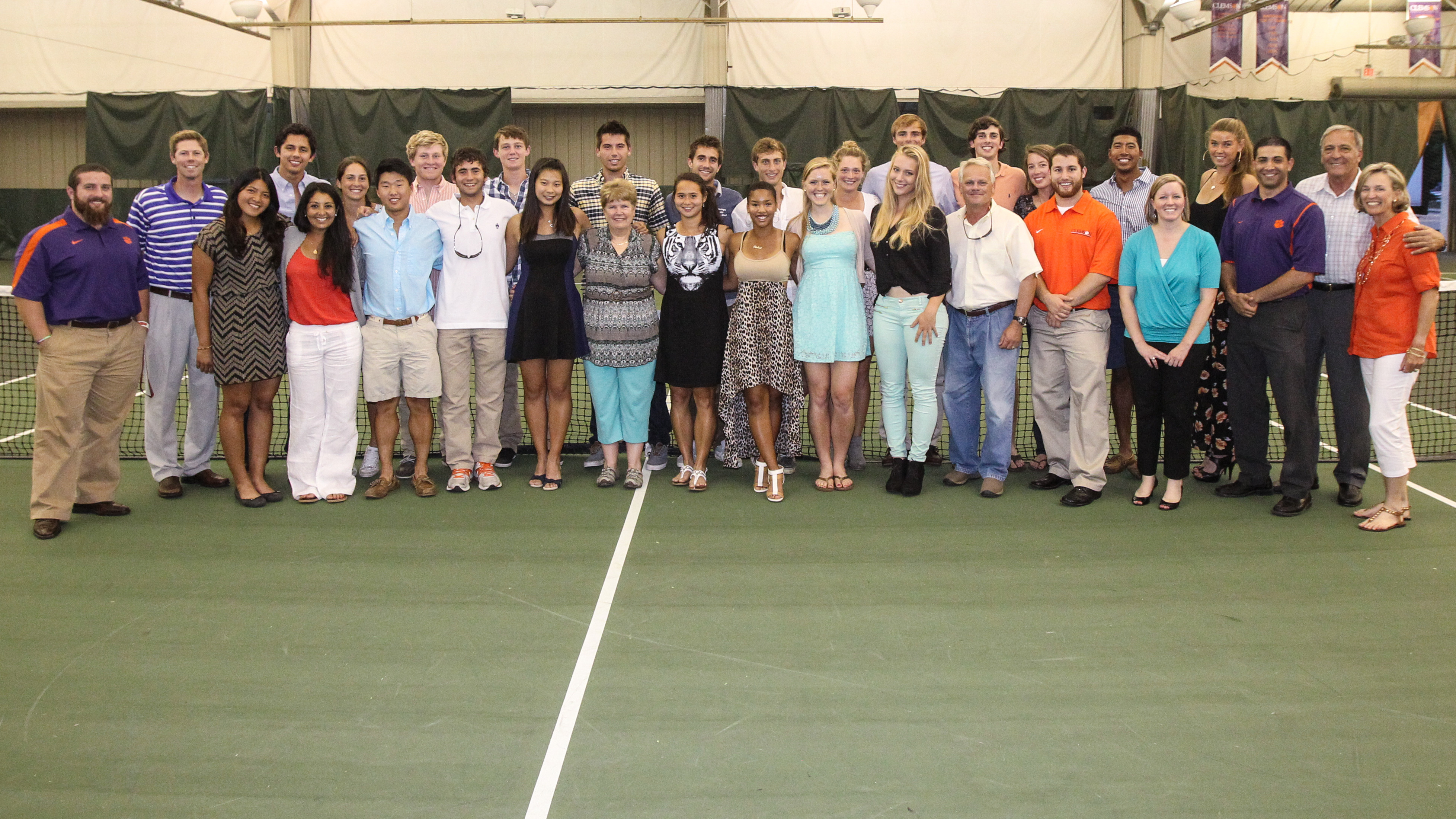 CLEMSON, S.C. – The Clemson men’s and women’s tennis teams, staffs and friends of the program gathered at the Clemson Indoor Tennis Center on Monday evening for the Duckworth Tennis Banquet. The dinner, named after tennis program supporters Ed and Jane Duckworth, honored the tennis student-athletes and celebrated the 2013-14 season.

Clemson is one of 14 schools that has both its men’s and women’s programs ranked in the top 25 in the nation, as the women are 12th and the men are 16th according to the most recent polls released by the Intercollegiate Tennis Association. Both teams concluded play in the ACC Tournament last week in Cary, N.C. and are now awaiting bids to the NCAA Tournament, which will be announced on Tuesday, April 29 at 5 p.m. (men) and 5:30 p.m. (women).

Yana Koroleva was named the women’s team’s Most Valuable Player, after spending the entire season ranked among the top 50 players in the nation while compiling a 25-9 overall record, which includes 11 wins in ACC play and eight wins over ranked opponents. She took down the No. 5 player in the nation in Clemson’s upset of No. 1 Duke, matching her highest-ranked opponent win. Koroleva was voted to the All-ACC Second Team. The team’s lone senior, she will graduate in May with a 3.70 in communication studies.

The Most Improved Player award for the women’s team went to Beatrice Gumulya, who went 10-4 in ACC play en route to her second consecutive All-ACC honor, this time earning a spot on the third team. The Jakarta, Indonesia native has spent most of the season ranked among the top 100 in the nation in singles, and is ranked with two different teammates in doubles. Gumulya and Koroleva have been ranked as high as 12th in the nation in doubles, and racked up a 25-10 doubles record, and a 6-3 record against ranked opponents.

Hunter Harrington was named Most Valuable Player for the men’s team. The junior from Spartanburg has a 22-12 overall record and a 15-9 dual match record so far this year, playing primarily at flight one singles. Harrington has been ranked in the singles top 100 for the entire season, and is currently ranked 51st nationally. Earlier this season, he clinched the Tigers victory over Virginia Tech with an upset over Virginia Tech’s 19th-ranked top singles player. Harrington and teammate Dominique Maden are currently ranked ninth in the nation in doubles, and have a 26-3 overall record and a 21-1 record in dual matches, including six wins over nationally-ranked opponents.

Maden earned the men’s team’s Most Improved Player award. The native of Stuttgart, Germany has an 18-9 overall record and a 15-6 record in dual matches, playing primarily at number-two singles. He entered the ITA singles rankings for the first time in his career at 99th on April 8, and is currently ranked 76th nationally. Also the team’s lone senior, Maden will graduate in May with a 3.76 cumulative GPA in marketing.