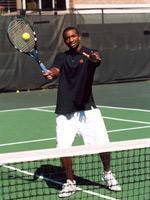 Clemson, SC — The Clemson men’s tennis team has been ranked 26th in the nation in the latest Intercollegiate Tennis Association National Poll which was released on January 13.

Clemson finished the 2003 season with a 25-11 record and a second place finish in the Atlantic Coast Conference. The Tigers advanced to the second round of the NCAA Tournament before falling to eventual champion Illinois.

Thompson has also earned recognition for his singles play with a 31st ranking in the ITA poll. Thompson also won the top singles championship last weekend defeating No. 27 Uli Kiendl 6-4, 6-4 at the number one position.

Head coach Chuck Kriese enters his 29th season at Clemson with a 565-356 record, making him the sixth winningest active coach in Division I men’s tennis. Kriese is also the ACC’s all-time winningest coach with 565 victories, a mark which leads the next closest coach by nearly 150 wins. In his 28 years, Kriese has led the Tigers to 20 NCAA Tournament appearances, 10 ACC regular season championships, and 10 ACC tournament championships. Overall, Kriese has led Clemson to 113 wins over teams ranked in the Top 25, more than any other Clemson coach in any sport in history.

Clemson returns to action on Saturday when it travels to Mt. Pleasant, SC to face The Citadel at 10 a.m. and College of Charleston at 2:30 p.m. at Patriot’s Point in the Tigers’ first dual matches of the season.