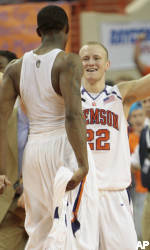 CLEMSON, S.C. (AP) – Demontez Stitt headed to the free throw line for two shots with his team trailing by one and 3.8 seconds to go.

Clemson fans held their breath. At least half of the Tigers’ eight losses can be tied to poor foul shooting, for the worst free-throw shooting team in the Atlantic Coast Conference.

But the freshman calmly sank both, giving No. 24 Clemson a 70-69 victory over Virginia Tech on Sunday, perhaps the most improbable ending in one of the school’s best seasons in years.

The Tigers (22-8, 10-6) locked up third place in the ACC, their best finish since winning the regular-season title in 1990. They will likely get a bid to the NCAA tournament for the first time in a decade.

Clemson was just 11-of-21 on foul shots, but finally made them when they made the biggest difference.

“It was nice to win one with free throws,” said James Mays, whose two foul shots with 1:31 left put Clemson ahead 68-66.

While the Tigers face a largely pressure-free ACC tournament, the Hokies (18-12, 9-7) will need at least a couple wins to feel better about their chances of making a second straight NCAA tournament. They finished fourth in the league, but their biggest non-conference win is over Big South regular-season champion UNC-Asheville.

“I’m not one to sit here and politic,” said Virginia Tech coach Seth Greenberg, his head down and his voice barely audible. “If they think we’re good enough to get in, we’ll get in.”

A.D. Vassallo led all scorers with 23 points. Deron Washington had 15 points and eight rebounds and Jeff Allen added 11 points and 12 boards for Virginia Tech, which has a bye in the ACC tournament for the third time in its four years in the league.

The closeness of this one shouldn’t be a surprise. The teams have met six times in the ACC, and all six games have been decided in the final 15 seconds.

The Tigers won Sunday despite hitting just three field goals in the final 12 minutes. The Hokies used a 15-2 run to turn a seven-point deficit midway through the second half into a 62-56 lead with 5:43 to go.

But Clemson turned its pressure defense back up. Down by five, Stitt hit a bucket to cut it to three with 2:35 to go, then a steal by Terrence Oglesby led to a putback by Rivers. Another steal by Stitt led to a thundering dunk by Mays that put the Tigers ahead 66-65 with 1:48 to go.

“We got some quick steals and it helped get our offense going again,” Mays said.

Deron Washington’s made a free throw with 40.2 seconds to cut the Hokies deficit to one, then poked the ball away from Stitt with about 25 seconds left. On the next possession, Washington tipped in Vassallo’s miss with 9 seconds left and Virginia Tech led 69-68.

Then came Stitt’s free throws. He had to wait as Greenberg took his time replacing Vassallo, who fouled out.

The freshman said he thought about his chance for redemption from the steal. But there was something else on his mind, too.

“I had missed a couple earlier in the game. My teammates told me no pressure,” said Stitt, the team’s second-best foul shooter at 78.3 percent.

He calmly made both, and Washington’s off-balance 18-footer at the buzzer was off, giving Clemson 10 wins in the ACC for the first time since 1989-90 and marking another season of improvement under fifth-year coach Oliver Purnell.

“This is a special day for this program. This group of seniors have really put a stamp on this program,” Purnell said.” All they’ve done every year is just get better and better.”