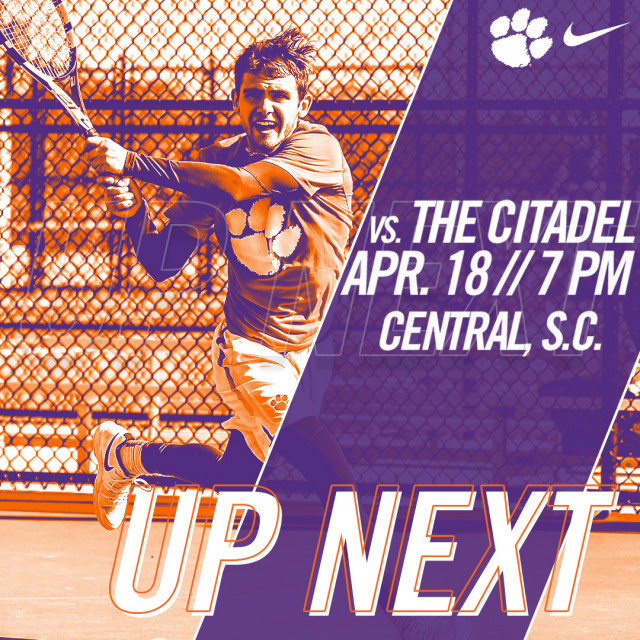 Clemson Set to Host The Citadel at SWU on Wednesday

– The Tigers are coming off of two road losses against Top 25 teams. On Friday, April 13 Clemson fell 5-2 to the 20th-ranked Blue Devils. Sunday, April 15 the Tigers dropped a 4-0 decision to No. 8 North Carolina.

– Alex Favrot is ranked 66th according to the ITA poll released on April 17. The senior from France is 12-13 overall this season and has played all 16 of his dual matches at No. 1 singles, and has defeated three nationally-ranked opponents.

– The French duo of Favrot and Simon Baudry are ranked 47th nationally in doubles. The pair is 11-5 overall, 7-4 in dual matches and are 4-2 in ACC dual matches.

– Baudry has won six out of his last seven singles matches, improving to 20-7 overall and is 11-4 from his No. 2 spot in the singles lineup.

– Yizhou Liu and Sam Edwards have teamed up to form the Tigers’ No. 2 doubles team, and the two are to 8-6 in dual matches this season, including a big win over Florida State’s 35th ranked team of Aziz Dougaz and Guy Iradukunda on Mar. 2.

– Head Coach Chuck Kriese of The Citadel coached at Clemson from 1975-2008. He is the winningest coach in ACC history with 685, led the Tigers to 10 ACC titles and seven berths in the Elite Eight. His accomplishments at Clemson earned him four national coach of the year honors.

– Clemson has won the doubles point in 11 of its 19 matches on the season. The Tigers have a 7-4 record in those 11 matches.