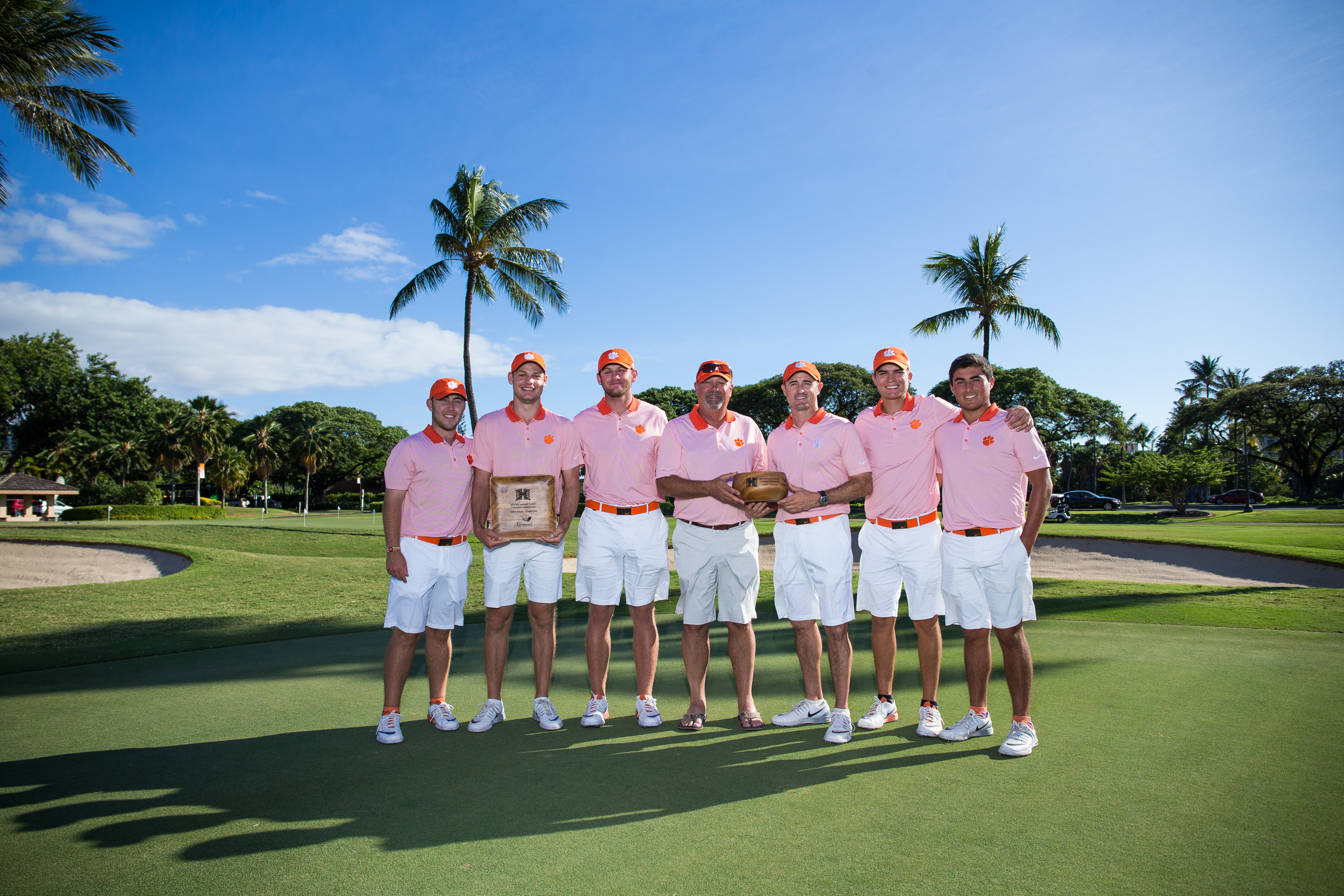 Clemson, S.C.—Freshman Doc Redman fired a final round 64 and sophomore Bryson Nimmer added a 65 to lead Clemson to the second best come-from-behind victory in Clemson history at the 24-team Ka’anapali Collegiate Classic in Lahaina, Hawaii on Sunday.

Clemson stood in fourth place and trailed Georgia by 12 shots entering the final round, but shot an all-time team record 264 in the final round to win by one shot over the Bulldogs.   The only final round comeback that is better took place in 2009 when Clemson overcame a 13-stroke deficit to Stanford in the final round of the U.S Collegiate Championship in Alpharetta, Georgia.

Redman won medalist honors for the second time this fall with a school record 198 total, the first Clemson freshman to win two tournaments in the same year since Jimmy White in 1974-75. Earlier this year Redman won the Jackrabbit in Nebraska.

Clemson had a 36-hole score of 562 and was tied for fourth with Kansas and South Carolina entering Sunday. But a 20-under par day, brought Clemson all the way back. While the young players had the lowest scores, it was seniors Carson Young and Austin Langdale who capped the rally. Young made a birdie on the 17th hole, his next to the last hole, and Langdale made a birdie on the second hole, his last hole, to complete the comeback.

Clemson’s final round on the par 71 Ka’anapali Country Club Course included 24 birdies and two eagles. The Tigers had a tournament best 66 birdies for the three rounds.

Redman shot a seven under par 64 on Sunday thanks to six birdies, an eagle and one bogey to finish at 15 under par 198 for the 54 holes. His 64 tied for the lowest final round in any tournament in Clemson history. He finished two shots ahead of LSU’s Sam Burns, the No.7 ranked player in the nation, who made a strong charge with a nine under par 62 on Sunday.

Redman finished with 18 birdies and an eagle over the 54 holes he played Friday to Sunday.   His 198 total score broke the Clemson record of 201 that had been held by Lucas Glover at the 2000 Jerry Pate Intercollegiate, D.J. Trahan at the 2003 Augusta State Invitational and Corbin Mills at the 2011 Jerry Pate.

Additionally, Redman’s 15 under par score tied the all-time Clemson mark for score vs. par over 54 holes. Trahan was 15-under-par at the 2003 Augusta State Invitational. Redman’s eagle on the par five sixth hole was his sixth of the year, tying the Clemson freshman record that Trahan set in 1999-00.   Redman has the entire spring schedule to break the mark.

Nimmer had shot rounds of 73 and 72 the first two days, then finished strong with six birdies and an eagle for his career best 65 on Sunday. He got off to a pedestrian start on Sunday, then played holes 6-15 at eight under par.

Young had a four under par 67 on Sunday and finished the tournament in a tie for 12th place, second best among the Tigers. He shot a four-under-par 30 on the back nine Sunday, including consecutive birdies on holes 12, 13 and 14 that got the final comeback going.

Langdale, who had an opening round 77, shot a 68 on Sunday. The senior had four birdies on the front side. Freshman Jonathan Rector had a final round 75, but his second round 67 kept the Tigers in contention going into Sunday.