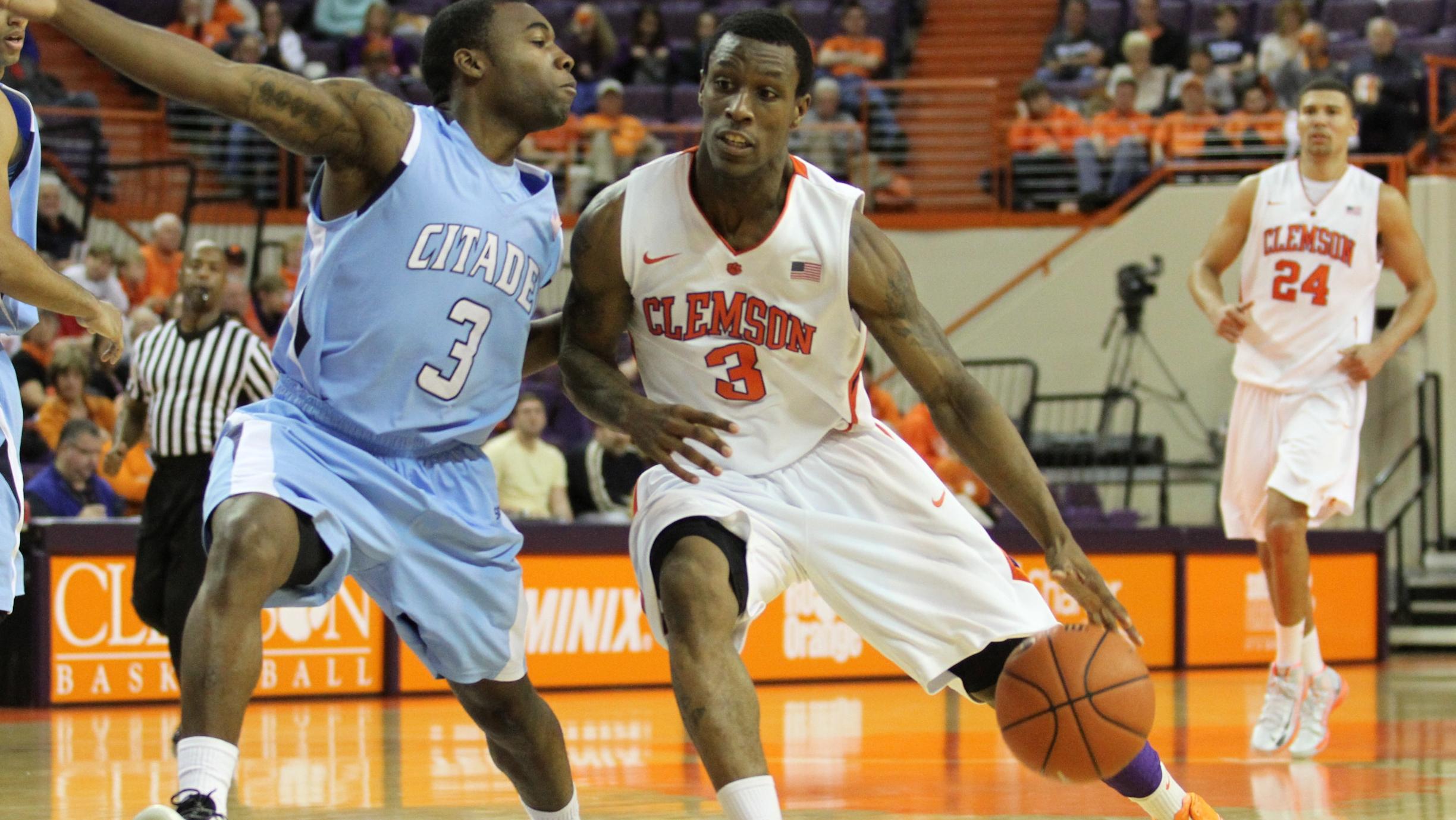 CLEMSON, SC – Clemson produced season-best offensive numbers in terms of shooting percentage and points in a 92-51 rout of The Citadel on Tuesday, the Tigers’ final non-conference game prior to the start of ACC play.  The win improved Clemson to 8-4, while dropping The Citadel to 3-8 on the season.

Adonis Filer scored a season-high 21 points, the most for a Tiger freshman since Terrence Oglesby had 21 against Puerto Rico-Mayaguez in 2007-08.  Filer did not miss in seven field goal tries and was 3-4 from the line.  He made all four of his three-point attempts, also a season-best.  Jordan Roper, another freshman guard, added 13, while Damarcus Harrison chipped in 10.

The Tigers’ 92 points were the most by the program since the 2009-10 season, when Oliver Purnell’s final team posted 94 against College of Charleston.  Clemson shot 61 percent and made 35 field goals, a high in 77 games under Head Coach Brad Brownell.  Defensively, the Tigers had 16 steals – also a high under Brownell.  Point guard Rod Hall had four of the steals.  Ten of Clemson’s 11 active players scored Tuesday.

Clemson jumped out to an 8-3 lead, but The Citadel closed to within a point after Matt Van Scyoc scored on a transition bucket.  The Bulldogs actually took the lead at 9-8 on a pair of free throws, but the Tigers responded with a 16-6 run that included seven points from Filer.  The Tiger lead stretched to 12 at 30-18 on a corner three by Milton Jennings.  He then found a cutting Rod Hall for a layup to push the advantage to 14.

Clemson’s run reached 13-0 after Jordan Roper converted a layup behind a screen from Devin Booker.  Filer hit his second trifecta on the next possession to make it 39-18.  The lead reached 24 on yet another Filer three-pointer with two minutes left in the half.  Clemson took a 47-27 lead into the halftime break.

A modest 9-7 run coming out of the break ended on a layup inside by Devin Booker, who hit the floor hard after tangling with Bulldog center Mike Groselle.  Booker had eight points and four rebounds, despite playing on a sore ankle.  He left the game and did not return after 17 minutes of play, but is expected to be okay.

Clemson used a working margin throughout the second half.  With Clemson up 60-40, the Tigers put together an 8-2 run that included dunks from Filer and K.J. McDaniels to push the lead to 26 points.  Filer hit his fourth three of the game moments later to give Clemson a 75-47 lead.  McDaniels provided a late highlight with a block on one end followed by an alley-oop on the other to bring the home crowd to its feet as the Tigers built a 35-point lead with just over four to play.

Groselle led The Citadel with 13 points and was 6-of-7 from the field.  He did have five of the Bulldogs’ 25 turnovers.  The Citadel shot 50 percent, but was outscored 44-13 in points off turnovers.

The Tigers stay at home to open the regular season portion of the ACC schedule on Saturday, Jan. 5.  Clemson will play host to Florida State at 4:00 PM at Littlejohn Coliseum.