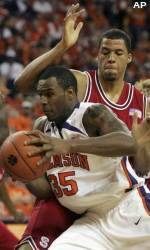 The Tigers (2-0 Atlantic Coast Conference) are within a win of tying the school’s best start, accomplished in 1986-87 and matched two years ago. It won’t be easy, though, with undefeated and fourth-ranked Wake Forest up next at Littlejohn Coliseum on Jan. 17.

Clemson struggled until Booker’s inside dominance and a smothering defense took its toll on the Wolfpack (9-4, 0-1).

North Carolina State wiped out a 10-point first-half lead and tied the game at 33-all on Trevor Ferguson’s drive with 15:18 left.

Then Booker led the Tigers on a 24-10 run to take charge.

Booker got things going with an close-in basket. His next bucket pushed the Tigers’ lead to 46-36. By the time he ended the surge with three straight hoops, Clemson was up 58-43 with 5:11 left.

The Wolfpack had matched Clemson in the second half, hitting six of its first seven baskets. But they withered against the Tigers baseline-to-baseline pressure, committing five consecutive turnovers that fueled Clemson’s decisive run.

North Carolina State finished with its lowest point output of the season, 21 points below their average coming in.

Courtney Fells had 10 points to lead the Wolfpack, whose four defeats have come to ranked opponents.

Booker added six blocks and three steals. It was his most points since getting 25 against Presbyterian on Nov. 28.

K.C. Rivers led the team with 11 rebounds but had his second straight sub-par shooting game for the Tigers with 9 points on 3-of-11 shooting.

Brandon Costner, North Carolina State’s leading scorer coming in at nearly 15 points a game, had 9 points on 3-of-9 shooting before fouling out.

Clemson’s defense figured to wear down North Carolina State. But the Wolfpack helped out with a major cold spell from the floor. They missed their first seven shots and were just 1-of-15 nine minutes in.

The Tigers didn’t fare much better at 2-of-11, which was why they were only up 6-2 after that stretch.

North Carolina State, the ACC’s fourth-best shooting team, never found its form in the opening half. The Wolfpack missed short ones like Courtney Fells botched alley-oop, and long ones, going 2-of-7 behind the arc.

Booker pushed the Tigers throughout the period. He had nine points, three steals and five of his six blocks.

It was Clemson’s fourth straight victory over the Wolfpack and the second time in three seasons it has opened the ACC 2-0.